Her novel may be Missing but Melanie Casey is right here 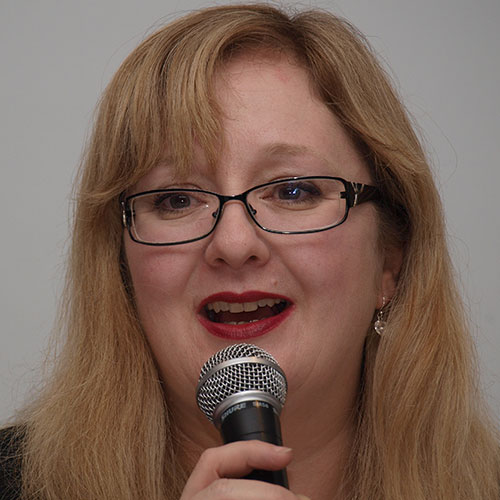 Melanie Casey speaking at Sisters in Crime in Melbourne in 2013

Q&A. South Australian Melanie Casey is the author of the Cass Lehman psychic sleuth series with Hindsight, Craven and now, Missing, all published by Pantera Press. She spoke to Robyn Walton, national co-convenor of Sisters in Crime Australia, about what makes her and her books tick.

Hello Melanie. First some questions on possible influences on Missing. Your protagonist, Cassandra (Cass) Lehman, comes from a line of women with psychic talents they use for good. They’re cat owners too. Did your background in Classical Studies and English Literature play a part in this characterisation?

Yes it definitely did. I read Aeschylus’ Agamemnon when I was studying and the classical Cassandra figure really irritated me. She was this amazing woman who had been gifted with the talent of being able to see the past and the future by Apollo. In one scene she has been taken back to Greece by Agamemnon and he’s about to take her into his house. She can see her own death but still walks into it, knowing what is coming. I found that fatalism really frustrating so I deliberately set about reinventing the Cassandra figure and giving my Cass a bit more self-determination and the ability to make choices about how she uses her talent of retrocognition (the ability to see past events).

I like to write cats into all my books – animals add a different dimension and I think they make my characters more sympathetic and realistic. I have always had cats myself so I enjoy writing my own animals into my novels. Shadow was my cat but sadly he died a few years ago.

Some contemporary writers for print, TV, film and other media have used female characters with psychic powers. Any influences there?

I love the genre and I have watched a lot of the TV shows that have similar themes. I liked Medium and, when I was younger, I liked Ghost Whisperer and Charmed. Practical Magic with the family of female witches living together was also an influence and I love movies like Stigmata and The Crow which have an element of the supernatural but are a lot darker.

In your prologue you quote from a 1829 verse about a spider enticing a fly. And your plot includes variants on elements that were popular in sensational 19th-century stories and melodramas: lunacy, captivity, menacing escaped convicts, lonely male lodgers … Were you conscious of any influences from that time?

Yes, absolutely. I like to echo well known works with my own twist. Missing is very deliberately echoing a particular penny-dreadful which I won’t mention for fear of spoiling the story for those that haven’t read it! There’s also a nod to Psycho in Missing and my first book, Hindsight.  I like to have fun with my novels and to see if anyone picks up the hints.

I grew up on a diet of Grimm and fairy tales generally. I still love folk tales and in the last few years I’ve enjoyed the trend where movie makers have reinvented fairy tales for the screen but for an adult audience. I also love Shakespeare – Hamlet, Macbeth and Romeo and Juliet are some of my favourites. I expect some of those influences creep into what I write.

Now some questions on how the novel took shape. Hunger, eating, and smells related to flesh and cooking are important throughout the novel, certainly in the plot and characterisation and maybe also as metaphors. How early in the writing process did you decide to use this theme?

I like to write about food and a lot of scenes in my novels show my characters eating or sitting around a dining table. It’s partly to make the writing more evocative – I hope readers taste buds are tantalised at times. I also hope it makes my characters more three dimensional – normal people eat and bond over food and my characters do too. On a separate note, the third book is certainly about sin and madness and so references to flesh and meat tie in with that as do the quotes from the Lord’s Prayer at the beginning of each part.

Your novel shows what a dog-eat-dog world it can be out there for modern-day “rough sleepers”. Homeless people living with dementia are especially vulnerable. Do you see your crime fiction as serving any social purposes? Do you hope to stir your readers into any kinds of self-examination or action?

I don’t deliberately try to build social messages into my novels. When I started researching Missing, I chose homeless men because they are very vulnerable and are often victims of violence that goes unreported. Having said that, I couldn’t write about homelessness without building some messages into Missing. Any statistics presented in the novel are based on Australian data. Without trying to preach I do hope that people’s awareness of the plight of homeless people who sleep rough is raised by the storyline and that people realise it’s a very real issue that doesn’t get nearly enough attention and government investment.

The police procedural chapters of Missing are most often told from the point of view of Detective Ed Dyson, who lives with Cass. These chapters are strong on office politics and colleagues’ relationships, with a lot of colloquial dialogue and humour. Did your career in government help you write these chapters?

Yes and no. Working in any office environment you always have politics and conflict. I’m pleased to say I don’t have a Crackers in my immediate workplace although I’ve come across one or two like him (he was actually a blend of an old university lecturer and a distant relative). I quite enjoy writing the chapters with Ed and Dave and Ed and Phil. Ed’s interactions with his colleagues tell us a lot about his personality and Phil in particular is one of my favourite characters because she’s so abrasive. She says all the things I’d like to be able to say.

The chapters focused on Cass are told in the first person. Were these parts of the book easier to write?

First person is often easier for new writers and the first novel in this series, Hindsight, was my first manuscript. I started writing Cass in the first person because the novel was focused on that reinvented Cassandra figure and I wanted her visions to be personal and very real to the reader. I kept the format of writing her voice in first person throughout the novel for the same reasons.

In Part One Cass and Ed are often arguing or not on speaking terms. Are these disputes there for structural reasons – to propel Cass to another location – or was it more important to you to explore the emotional and psychological growth of Cass and Ed? In other words, would you see yourself as either a plot-driven or character-driven storyteller?

I think I lean towards character-driven. Conflict transforms characters and Ed and Cass are on a journey with their relationship. They’re also both damaged or vulnerable in various ways and so that makes their relationship difficult at times. If they got along all the time it wouldn’t be very realistic or very interesting either!

While Missing can be read as a stand-alone fiction, it’s the third book in a series. You bring back a serial killer character. What were your reasons for doing that?

Missing is intended to be the final book in the series, at least for now, so I wanted to close off a loose end and give Cass some closure with the demons that had been plaguing her since her encounter with the serial killer in Hindsight. The conflict with him also tests Cass’s own values and teaches her a few valuable lessons about what she’s capable of.

Anything else you’d like readers to bear in mind as they begin reading Missing?

No, I’d really like them to just enjoy the ride. People tell me my books are good binge reads so clear a weekend and settle back in your favourite chair with a few tasty snacks on hand.