If You Were Here by Alafair Burke 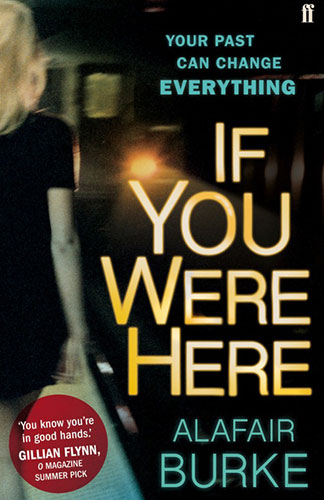 Author: Alafair Burke
Publisher: Harper
Copyright Year: 2013
Review By: Michaela Lobb
Book Synopsis:
Manhattan journalist McKenna Jordan is chasing the story of an unidentified woman who heroically pulled a teenaged boy from the subway tracks. When she locates a video that captures part of the incident, she thinks she has an edge on the competition scrambling to identify the mystery heroine, but is shocked to discover that the woman in the video bears a strong resemblance to Susan Hauptmann, a close friend who disappeared without a trace a decade earlier.
What would have been a short-lived metro story sends McKenna on a dangerous search for the missing woman—a search that will force her to unearth long-buried truths much closer to home…

This was the first time I had read an Alafair Burke book and I enjoyed reading it. I even remember being happy to get on the train so I could read more of it.

However, as I sat down to write this review all I could think of was how much I did not like the main character, McKenna Wright.

Even as I was reading the book I knew I didn’t like this woman, in fact I started to skim her parts just so I get could get back to everyone else in the story.

McKenna is a dolt, a completely smug narcissist and I have no idea at all why any of the other characters in the novel (all of whom I did like) put up with her, let alone have any loyalty or love towards her.

The opening chapter is fantastic. A teenage boy making a living out of stealing mobile phones in New York’s crowded subway finally picks on the wrong woman and she chases him down to get her phone back. During this chase the boy falls onto the tracks and is rescued by the mystery woman who literally picks him off the tracks, then reclaims her phone and disappears back into the crowd.

Then we meet McKenna who has been sacked as an ADA for behaviour that is nothing short of being stupendously moronic, has tried her hand as a novelist (fail) and is now working for a magazine. McKenna is on the hunt for a story for her upcoming deadline. She hears about the boy’s subway rescue and obtains a short video snippet which will hopefully help her get the scoop on revealing the identity of the mystery woman rescuer.

The video shows a grainy glimpse of the woman’s face and McKenna becomes convinced that the woman is actually her long-thought dead, missing for a decade, former flat mate and sort of best friend, Susan Hauptmann.

Now Susan (unlike McKenna) is a fascinating woman and I couldn’t get enough of the chapters that slowly reveal her character, a restless former soldier, daughter of a General and West Point graduate. Susan has seen war, drinks heavily and sleeps around (a lot), including with a former West Point classmate who is now married to McKenna.

The search for the truth about Susan takes McKenna and those close to her on a dangerous journey. The curves and twists were well written and exciting. The story itself felt like it was trying to break free from both the author and McKenna to let the other characters steal the show and take over the narrative. But the author was relentless in dragging the story, kicking and screaming, back into McKenna Land and by the end of the novel the others were merely foils to showcase how Right McKenna Always Is!

Overall, this was a good book with a strong plot and interesting characters. The author writes well only occasionally falling into the “telling not showing” trap and I guess it is not the author’s fault that I found her main character really annoying. After all, you can’t like everyone all the time!

I will definitely read more of Alafair Burke’s novels as she has a great writing style that I enjoy and I will let you know how I go.