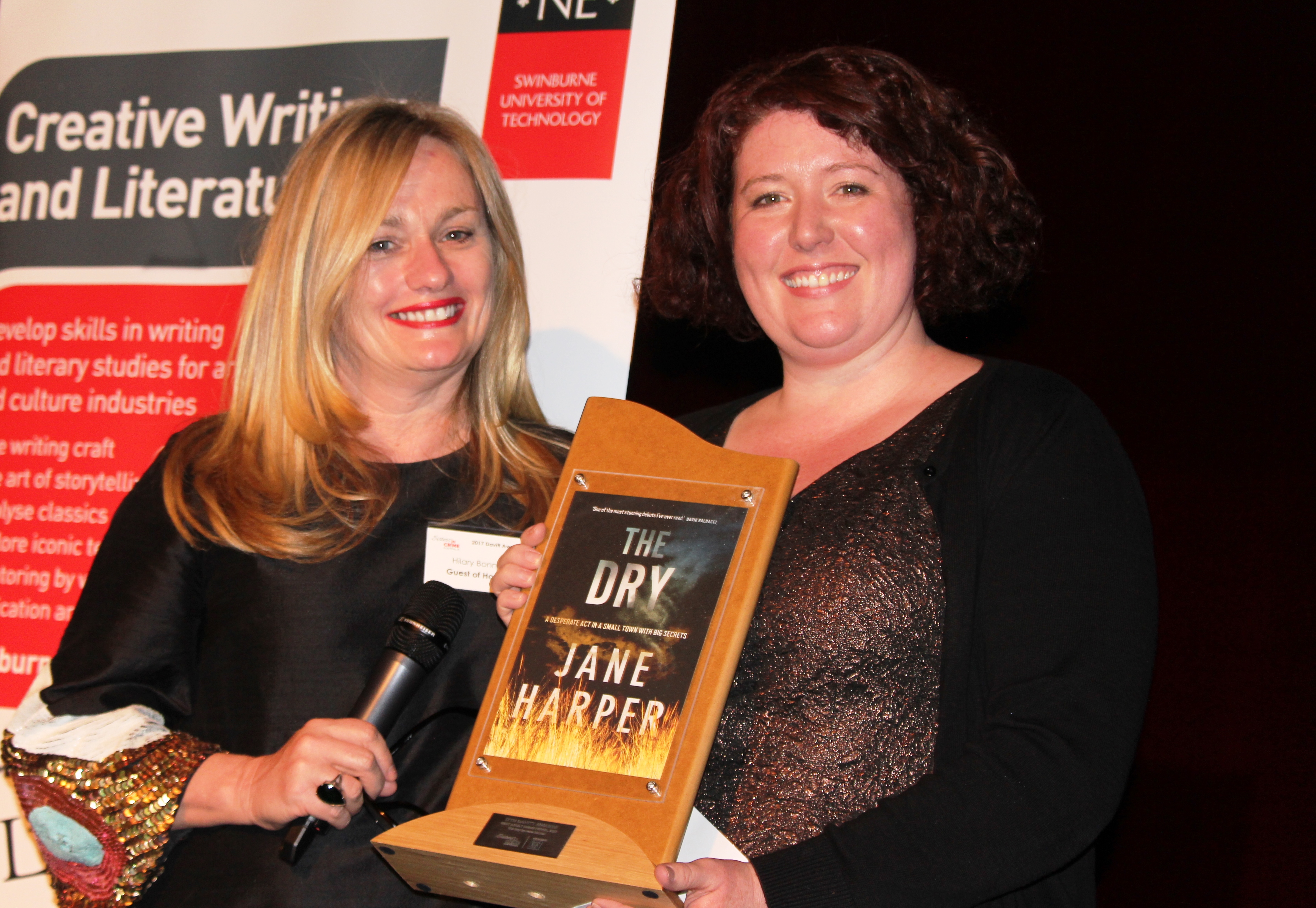 Sisters in Crime  member Jacquie Byron has just returned from the Bloody Scotland crime convention in Stirling and has concluded that crime (fiction) is one’s of Melbourne’s top exports. (Her feature published in The Sunday Age M Magazine on 20 October follows.)

Crime sells, just ask authors such as Lee Child, Ian Rankin, Val McDermid and James Patterson, the latter who was named highest-paid writer in the world last year when he took home more than $US80 million ($118,055 million) in royalties.

Crime fiction globally, including thrillers and mysteries, is the golden child of publishing and Australia – Melbourne in particular – is finally getting in on the action, our stories hitting a chord both here and abroad.

Yes, we’ve had writers with international careers, Sydneysider Michael Robotham is a case in point, but he says, until recently, books with Australian settings, characters and voices were not particularly welcome.

Speaking on stage at this year’s “Bloody Scotland”, the international crime fiction festival held in Stirling each September, Robotham recalled a conversation from about 2013 when he was embarking on a standalone book set in Texas.”My UK publisher said he’d rather it be set in the UK or the US – anywhere but Australia because no Australian crime novel had ever become a big international hit.” I replied, “until one does”.

Robotham told the audience that Jane Harper’s The Dry was “that one” and, speaking later to The Age, added: “She changed the game for Australian crime writers, introducing readers to Australian stories and showing international publishers that if the novels are good enough, the readers will come.”

Robotham, known for psychological thrillers, including the Joe O’Loughlin series, is translated into 25 languages and is published in more than 50 countries. He says publisher-prejudice is not actually the reason his books are set overseas. But it probably didn’t help.

“I spent a long time living and working in the UK, where I got my start as a writer, but one day I intend to set a book in Australia, when I come up with the right story. And I’m now much more confident, thanks to the success of Jane Harper and others, that the Aussie setting will be embraced by my international readers rather than prove a negative selling point,” he says.

Melbourne-based Harper sold more than a million copies of her debut novel and the movie version, starring Eric Bana, is well under way. But her evil thoughts are not the only ones we’re exporting. The Cry, aired in mini-series format on ABC television this year, was produced by a UK production company but is based on a book by former Kilmore resident Helen FitzGerald. Now living in Glasgow, The Cry was her sixth adult book but the first one she’d set in Australia. She felt it was her best.

“It was really nice when The Cry came out as a show and I was claimed a little bit by Australia,” she says. “I’d never felt confident to write with the setting in Scotland but country Victoria was in my bones. I’d lived and breathed it so I was really thrilled and proud to see it up there.” The backdrops of Queenscliff and Point Lonsdale in the television adaptation of The Cry are genuinely close to home for the author; her mum shops at the small IGA where the baby at the crux of the story disappears.

Having lived in Glasgow for more than 20 years and raised two children there, FitzGerald says she never felt like a Scottish author but, similarly, didn’t feel like an Australian one either. The confidence to set a book “back home” came from an unexpected source.

“I wrote what was probably one of my best received pieces ever, just a small article on a BBC website comparing the differences between a day-drive in country Victoria to one in Scotland,” she says. The comments section exploded; people loved her description of repetitive hometown scenery: “blue sky, yellow grass, gnarled trees, blue sky, yellow grass, gnarled trees”. The same distance in Scotland, she wrote, offered everything from grey skies and brown rivers to black skies, Stirling castle, green hills and the Kessock Bridge across the Beauly Firth.

In her most recent book, Worst Case Scenario, FitzGerald returned to a Glasgow setting, ending up with a seven-way bidding auction and, ultimately, a hush-hush television production development deal. Now, fiction-wise, she is back in country Victoria, writing a book called Ash Mountain which has already been snapped up by The Cry’s producers, sight unseen.

“It’s a bushfire story,” says FitzGerald. “Not actually about my town of Kilmore but about towns like it, ones with a Marist Brothers school for instance and lots of nastiness.”

Small towns fascinate the author. She feels they often seem “beaten down” by events. “Maybe it’s just me but my memories of growing up are of tragedy everywhere, people dying in car crashes, abuse scandals. These are hard-knock towns. Everything from the gold rush and white settlement to recent environmental and social problems have taken their toll. When disaster strikes, things like bushfires, these places are ill-equipped to handle them.”

Mark Brandi, fellow Victorian and winner of the prestigious UK CWA Debut Dagger award in 2016 for his novel Wimmera (retitled Into the River for the UK), understands the appeal of such places too, especially in what he refers to as the “rural crime sub-genre”.

“Our landscape can be used to such great effect because, even though most of us live on the eastern seaboard, you have that isolation of rural towns and the sense they’re quite different worlds,” he explains. “They can be wonderful of course but also intensely claustrophobic places. In literature, this provides a really good, ripe constraint, a relatively small cast of characters where everyone knows each other.”

Brandi also thinks the international reporting of true crimes such as “Ivan Milat and the backpacker murders, Snowtown or Peter Falconio” created fertile ground for our crime writers. “Once again, it’s the fear of the unknown, being isolated, the outback … not great for tourism perhaps but great for writers.”

He recognises an “appetite” for Australian crime writing these days which he sees reflected in sales but also at writers’ festivals. “In terms of local readers,” he says, “I think they want to hear stories about themselves too.”

Next month, the Australia Council is sending four writers to the US to promote Australian crime writing. Robert Gott, mma Viskic, Jock Serong and Sulari Gentill will meet publishers, booksellers and readers, travelling to speaking events and bookshops in Los Angeles, New York, Boston, Arizona and Texas. They will also attend the Bouchercon World Mystery Convention in Dallas, which showcases works by crime writers from around the world.

And Australian authors are obviously drawcards on the festival scene. Earlier this year Jane Harper, working on her fourth novel from her small St Kilda office, was part of a new Antipodean Noir panel at the famous Theakston Old Peculier Crime Writing Festival in Harrogate in England. The panel also included fellow Victorian author of The Nowhere Child, Christian White.

The festival’s 2019 Programming Chair, Mari Hannah, inherited the role from “the legendary Lee Child” and felt “the pressure was on” to come up with great ideas.

“I thought it would be wonderful to celebrate authors from Down Under. We promoted Antipodean Noir as ‘the hottest crime wave’ knowing that readers were excited at the prospect of seeing Jane Harper on the program,” she says. The panel was a sell-out.

“As a festival we try to promote established authors and introduce new voices to a hungry reading public … Reading is about taking people on a journey, exploring other cultures and landscapes, crossing borders, shining a light on the big issues. In that respect, Australia is no different from any other country. So long as the stories are good, readers will devour them,” says Hannah.

Statements such as this are music to the ears of industry professionals such as literary agent Grace Heifetz of Left Bank Literary who counts Brandi among her clients.

“This popularity has been building for a few years now so I don’t think we need call it a trend anymore,” says Heifetz. “The quality and calibre of writers coming up is not a gimmick now. These are solid foundations, something Australian writers are being known for worldwide. I don’t see that changing because there is such a hunger for it.”

Heifetz does concede, however, that unique Australian settings play their role. “I don’t think you can deny that incredible sense of place our writers are able to evoke with their writing – even for Australian readers. It’s like the American south and the wild west all at once. It’s incredibly compelling,” she says.

Harper also feels a good story is more important than quintessential “Aussie” scenery, despite the fact her more recent books Force of Nature and The Lost Man are set around outback cattle stations and treacherous mountain ranges.

“The questions I most often get from readers involve the universal themes, things like family dynamics and the pressures we all experience, no matter where we’re from. But there are ways that setting increases reader interest,” she says.

“There are three levels to it,” says Harper. “First you have to give people something to get involved with, make them want to find out what happens and follow characters through to the conclusion. Then, if you can place the story in a really strong setting that’s even better. Finally, readers really like it when that setting goes on to inform the plot, when it becomes a key factor in how events play out and how people behave or are formed.”

Still, the author says she does not feel pressured to stick to plots outside of city limits. “I have three English language publishers – Pan Macmillan, Flatiron and Little, Brown – and they’re all really good in terms of supporting me to write the best book I can, in whatever form that needs to take,” says Harper. “Saying that, obviously I’m aware that it has worked very well for me so far and it’s something I really enjoy. I’m definitely always looking for stories that bring out that Australian flavour but the diversity of this country means there are still so many options to explore. It’s just really great that it’s being embraced by readers overseas as well.”

Setting books in Australia, for Harper, seems to expand the possibilities rather than limit them. “Australia’s isolation, combined with weather that can turn on you and impact your life and your safety, plus the sheer range of landscapes and communities we have (think agricultural Victoria as opposed to outback Queensland) produces such rich settings for the characters to act out against. There are just endless opportunities,” she says.