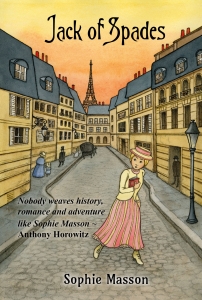 Linda’s father is missing in Paris, and her only clue is the Jack of Spades card that was sent to their home in London. In the family code, ‘Jack of Spades’ means danger. But it is not her father’s handwriting on the envelope!

Setting out to look for him, Linda is soon whirled into a frightening world where nothing is as it seems. Who are the people following her? What was her father really doing in Paris? Who can she really trust? As she works against time to try and solve the mystery of her father’s disappearance with the help of some new friends, Linda begins to realise that she has stumbled into a dark and dangerous conspiracy which threatens the future of the whole world…

Recommended for older YA readers this is a carefully-crafted, well-written and fast-paced thriller that involves a young sixteen-year old bilingual English girl who travels to France to help her hapless (she thinks) Shakespearian-scholar father who seems to be calling out to her. Instead, she finds herself befriended by a handsome hero, ensconced in a guesthouse full of young people from different backgrounds, and, ultimately, involved in a strange tale of espionage with nothing less than nihilistic threats to the stability of Europe at stake by assassinations of its leaders.

Within this set up Linda happens upon people murdered, betrayals, suspicion, suspense, the usual inscrutable British handlers, and assorted odd and engaging characters. She shows huge resourcefulness and resilience, loyalty and good sense, and is overall a great role model for modern women, although they might not ever have to deal with spy rings. It is a real page turner and if the end is just a little predictable well, surprise endings in novels as in life are not always all they are cracked up to be. Along the way are vignettes of Parisian life and a lot of action and a bit of romance which all add up to a jolly good read.