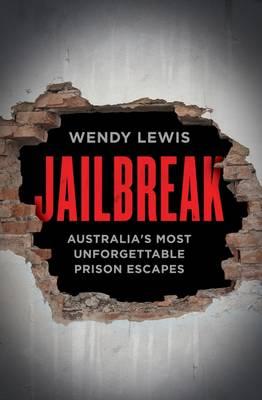 ilbreak chronicles the pick of Australian prison escapes with the most notorious prisons and most desperate escapees. Ranging from sheer brutality to love-conquers-all, every one of these stories is riveting and real.

True to its title the book concentrates on the jailbreaks themselves with a minimal amount of the befores and afters. It is arranged in twenty-four workmanlike chapters divided into four sections with six cases to a section. The breakouts have their own range of pathos, savagery, ingenuity and even humour and range from early convict days until modern times and increasingly techno-savvy means of escape. They feature well-known names like Kevin Simmonds and Leslie Newcombe, Ronald Ryan, Raymond Denning, Darcy Dugan, Arthur Halliday, the great Queensland escapologist, and several others.

The breaks entail a dizzying ride through multiple offences, offenders, and escapologists, tunnelling their way through cement with not much more than kitchen utensils, using the trusty hacksaw or angel wire, tying sheets into ropes, clambering up walls, jumping across roofs. As the kidnapper, Edwin Eastwood, remarked, ‘Pentridge is full of prisoners with broken feet and ankles from jumping off walls’ (p.173). Other attempts involved making a raft with a table top and a bathtub, using a helicopter to break out, distracting warders with diversions of various kinds, or just walking out of open prison doors wearing a warden’s cap.

The offenders are represented as sad losers, men who want to get out to lead a decent life, or vicious criminals who kill inside prison and when on the run. Some are so smart that as a judge remarked of one, we can only imagine what a productive life he might have led had he not broken the law and found himself inside, repeatedly. Indeed, the means used to escape are so ingenious they often do seem to be the result of good minds and much patience used in their execution.

Lewis writes with dry wit and economy so that the accounts have flashes of humour. Overall, though, they stands as an indictment of the prison system and the terrible waste of lives as men are made to languish for months at a time in solitary, or endure other cruel and inhuman treatments at the hands of warders and outdated or inappropriate rules, in what are often completely outdated and inadequate prisons. Rehabilitation seems a faint dream in the prisons in these pages. At least one lit a fire in his cell in protest and killed himself and three others when resentenced to life.

Some prisoners regard it as their duty to break out from imprisonment or do it for love or the joy of being free even if it means another sentence once they are caught, as they are sooner or later. One is struck by the number of women who wait loyally for them or help them escape, or provide shelter for them when they are on the run. Conversely, one woman prisoner, Julie Cashman, was aided by two men in turn in her breakouts, neither of whom met a pleasant end. Nor do many of the escapees.

Another theme that emerges from the cases is the nature of the Australian bush itself which assumes the character of an avenger as escapees try to hack their way through it to evade capture only to be caught exhausted, wet, cold, covered with lacerations and/or leeches, and near starving a few days later. Early convict escapes in Tasmania were so desperate that the one documented here involved serial cannibalism to ensure that only the strongest survived; others later turn themselves in rather than face the rigours of the bush for which they are ill-equipped.

So, this is both a fascinating and a sad book, one in which men set upon men and have animals set upon them. For some reason the names of two alsations [sic] which are sent to track down Kevin Simmonds stay in my mind, Dawn and Chrissie they were called, pretty names for an ugly business.