Kiss Of Death by PD Martin 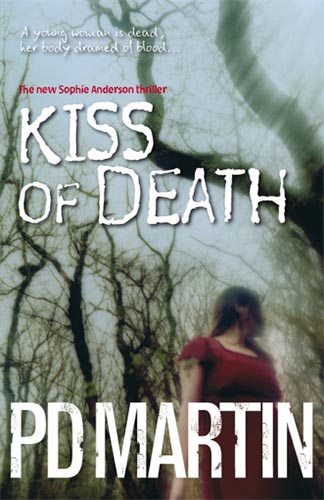 Author: P.D. Martin
Publisher: Pan Mcmillan
Reviewed by: Jacqui Horwood
Book Synopsis: In Kiss of Death, PD Martin has tapped into the zeitgeist and woven a story around idea of modern day vampires living in Los Angeles. FBI profiler Sophie Anderson is called in by the local police when a body of a woman is found with puncture wounds in her neck and seems to have been drained of blood. Sophie finds herself investigating a sub culture of people who believe they are vampires and must drink blood to survive. All roads seem to lead to Anton Ward, the charismatic head of a group of vampires called After Dark, who has all the hallmarks of a cult leader. Sophie finds herself drawn to Anton and is intrigued when it appears that he senses her ability as a psychic.

Complicating matters for Sophie is that she’s forgotten that her boyfriend, Darren, was coming to stay with her. Can she balance her relationship with her dedication to her job?

PD Martin’s latest book is well researched and offers some fascinating insight into the possible causes of vampirism and the manipulations and mindsets of cult leaders. Kiss of Death is a fabulous journey into a dark world that few of us would ever see.