Lambs to the Slaughter by Debi Marshall 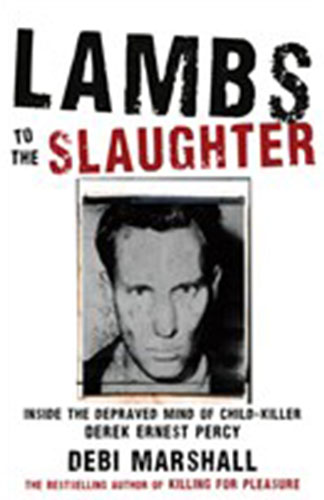 award-winning true-crime author Debi Marshall applies her investigative journalism skills to a forensic examination of the crimes, the man and his modus operandi.

Informed by exclusive material never before seen — poignant and insightful interviews with Percy’s mother, victims’ families, psychiatrists, police officers and former colleagues — Marshall also takes us on her personal journey as she seeks to unravel the truth about the monster whose lonely, idiosyncratic character has deceived the best psychiatric minds for 40 years.

Is Derek Percy responsible for Australia’s worst unsolved child abductions and murders? Is he mad — or just bad?

The strange thing about starting out reading a book like LAMBS TO THE SLAUGHTER was a vague feeling of uncertainty. Mostly because the man at the centre of this book – Derek Ernest Percy – has one of those names that instantly rings very loud bells. Uncertainty because despite knowing that he’s the man that so many law-enforcement agencies in Australia are convinced is a multiple child-killer, I found I didn’t really know much about him at all. At the end of LAMBS TO THE SLAUGHTER, the disturbing thing is that you still aren’t going to know a lot about what makes the man tick. No fault of the author mind you, Derek Ernest Percy is one of our world’s strangest, most disturbing, worrying individuals.

Marshall uses her investigative background to inform the way that she’s approached this book – going through a detailed examination of the crime that the man is definitely known to have committed, his modus operandi and, as much as is possible, his personality, character and background.

What is slightly unexpected is the way that the tone quickly moves from that of a dispassionate investigator to something that’s obviously become very much a personal journey. Partially this is because Percy has been tried for one child killing (which was horrendous, leaving behind a lot of devastated people), but also because Percy is the chief suspect in so many other child disappearances and murders. Obviously Marshall feels a considerable debt to the families and friends of all the people who have been unwittingly affected by Derek Percy. There’s also a personal consideration which she touches on in the narrative.

Those aspects might explain why the tone of the book isn’t completely dispassionate. The subject matter is emotive, and dire and sobering, and somehow the tone wrongfooted this particular reader – making the informative aspects seem to lack a little informed gravitas.

Undoubtedly that reaction’s very much a personal thing and I wouldn’t be at all surprised for it not to be a shared experience.

Percy has baffled psychiatrists for many many years, he was found not guilty of murder once on the grounds of insanity, and he is effectively held indefinitely, considered too dangerous to be released. One of the interesting parts of this book is Percy’s current legal status – which is unique. Part of the difficulty in understanding Percy is that he will not engage with anyone, has always refused all offers of treatment.

Marshall therefore uses interviews with Percy’s own mother, his victim’s families, police officers, former Armed Forces colleagues, and a number of psychiatrists as fodder for her investigations and propositions. What is, and seemingly will always be missing, is any personal insights from Percy himself who resolutely refuses to discuss, acknowledge, or even engage with anyone around him.

The downside to a book such as this is as a direct result of the subject matter – as long as there are so many suspicions swirling around Percy, there’s always going to be speculation. Justifiable speculation undoubtedly, but it appears that without changes to the current law or his personal testimony, the truth may never be known – hence conclusions are drawn, possibilities discussed. I don’t know what it must feel like to be a parent, or sibling of any of his suspected victims, and know that probably you’ll never know for sure what really happened.

The question behind the book, as declared in the blurb – “is Derek Percy responsible for Australia’s worst unsolved child abductions and murders?

Is he mad – or just bad?” seemingly cannot be answered. What the book really does is give an indication of how frustrating and painful it must be for so many people to know that he’s there – held in custody.