Launch of Ellie Marney’s, Every Move 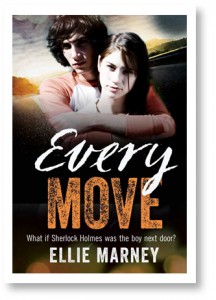 Sisters in Crime members and supporters are warmly welcomed to the launch of Ellie Marney’s, Every Move, the 3rd (and final) book in her Every Young Adult crime series – 6-8pm Monday 16 March – Readings Carlton, 309 Lygon St, Carlton

Adele Walsh, the Program Coordinator for the Centre for Youth Literature at the State Library of Victoria, will launch the book. There will be other speeches, Ellie says, “not too long, food (something easy), drinks (on the house), book signing and much general silliness. All welcome! (and you don’t even have to wear a funny hat!).”

Here are some clues about Every Move:

After the dramatic events of London, a road trip back to her old home in Five Mile sounds good (in theory) to Rachel Watts, with her brother Mike in the driving seat. But when Mike picks up his old buddy – the wildly unreliable Harris Derwent – things start to go south. Back in Melbourne, Rachel’s ‘partner in crime’, James Mycroft, clashes with Harris, and then a series of murders suggest that the mysterious Mr Wild – Mycroft’s own personal Moriarty – is hot on their tail. When tragedy strikes, Rachel and Mycroft realise they’ll have to recruit Harris and take matters into their own hands…