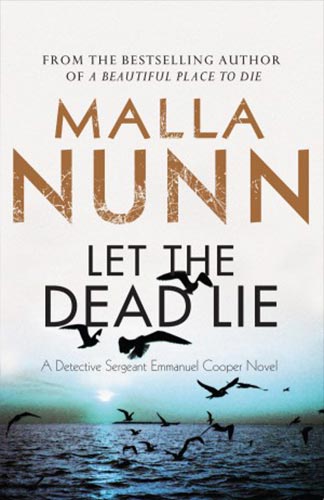 Author: Malla Nunn
Publisher: Pan MacMillan Australia
Copyright Year: 2010
ISBN: 9781405039208
No of Pages: 390
Review By: Sharon Halasz
Book Synopsis: Let The Dead Lie is the second novel featuring Detective Sergeant Emmanuel Cooper, a flawed, but trying-to-be-honourable man haunted by his past. He first appeared in A Beautiful Place To Die, the events of which are hinted at in this book, but not in enough detail to spoil the mystery if read out of sequence. I do recommend reading the books in order to better understand both Emmanuel Cooper and the setting.

1950s South Africa is very much a character in this series – indeed, I’d describe it as the main antagonist. From the comfort of a 21st century armchair, it’s a most confronting world that dwells in my memory long after finishing the book. After a harshly beautiful rural setting in the first book, this story moves to the coastal city of Durban. Malla Nunn’s deft descriptions drew me in to this gritty underworld – excellent to read about, hell of a place to live. Or die.

Faced with a ticking clock – forty-eight hours to solve the murders or face arrest and likely hanging – Emmanuel Cooper follows leads and tracks witnesses. Like him, the reader is unsure who to trust. Sometimes help comes from unlikely sources. Danger too. Even his former boss and supposed protector has his own agenda. A fascinating cast of characters overall. I wondered how it would all come together in the end. A suitably twisty ending, of course.