Lie with Me by Sabine Durrant 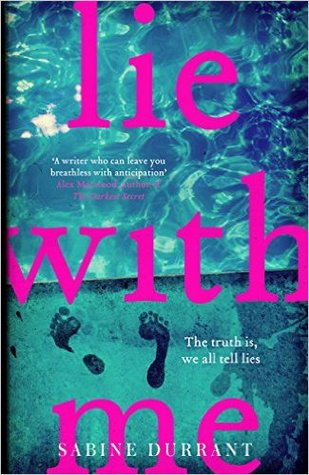 “I suppose what I am saying is, how much do we collude in our own destruction? How much of this nightmare is on me?

You can hate and rail. You can kick out in protest.

You can do foolish and desperate things, but maybe sometimes you just have to hold up a hand and take the blame.”

Sabine Durrant is an English author with four previous titles for adult readers, two for teenagers and a background in writing for newspapers and magazines. Her new novel, Lie with Me, is set in London and Greece in 2015, with references back to characters’ personal experiences 10 years earlier in Greece and 20 years earlier in England.

Lie with Me is best categorised as “psychological suspense”. The action moves forward slowly, centring on everyday domestic interactions related by a flawed first-person narrator. If you have qualms about authorial appropriation, I’d advise you to avoid this novel: Durrant writes from the point of view of a middle-aged man. Whether Durrant convincingly carries off this novel’s performance of masculinity is a different consideration. I found her narrator’s capacity to notice details that are usually the province of women stretched the character’s believability, but not irreparably so.

Durrant is an author confident enough to stay with her chosen pace and MO, confident she’ll draw her readers along with her, engaging their curiosity and rousing expectations. If you enjoy letting yourself be played in this way, you’ll agree with the blurb writer who describes Durrant’s narrative as “simmering with menace”. If, however, you prefer high-stakes action from early in a crime fiction text, try another novelist. Ditto if you dislike books in which the victims of assault, rape, accident etcetera are female.

Durrant’s title refers to the fact that her narrator, Paul Morris, is a self-confessed liar. In another era he’d have been called a cad. All the way through the story this lazy, broke, jumped-up, charming writer is telling porkies and pilfering. The title also points to Paul’s unwisely conducted sexual adventuring. He prefers and frequently hits on very young women. However, he does not say no if a woman closer to his own age (42) is available. When widowed lawyer Alice invites him home after a couple of casual meetings, Paul smells an opportunity. He hears Alice out while she talks about her campaign to find a girl who vanished a decade earlier on the island where she and her family and close friends routinely spend their summer holidays. (Yes, this is yet another UK novel echoing the Madeline McCann child-abduction scenario.) Here are Paul’s thoughts about the disappearance and his prospects with Alice:

I was bored of the subject. The dead girl  ̶  because of course she was dead  ̶  wasn’t bringing out the best in Alice. I wanted more of the sexily efficient businesswoman from dinner with her deportations and hearings. Or the grubby domestic goddess from Andrew’s house. I remembered the laugh I had wrung out of her in the garden  ̶  a girlish tinkle with a filthy undertow; the way she had licked the cappuccino foam from her finger. I knew as well as anyone how life gives us certain roles to play. But I had had enough of her goodness, of feeling in the wrong, of this misery memoir. The Merlot was a good one  ̶  fruity and soft, warm blood in the mouth. I’d have another glass and, unless things changed, be on my way. (p. 43)

Paul’s persistence pays off and within months he is a free-loading guest on a combined families’ holiday, sharing a bed with Alice and perving on the two teenage girls in the party. The culture of the lightly fictionalised Aegean island is not idyllic, with the rape of a young female traveller in the township provoking close-to-home suspicions of complicity and cover-up. Paul’s relationship with the other adult male in the household, old acquaintance Andrew, is marked by sniping and sexual jealousy. Paul’s history of dishonesty, selfish liaisons and flight from responsibility means he has left behind a trail of hurt, and gradually it emerges that Andrew holds Paul to blame for a family tragedy two decades earlier.

Here’s an excerpt showing Paul’s increasingly fractured narration in the later stages of the story as things are beginning to close in on him:

The dark bedroom. The cool of the pillow against my face. My head was full of Florrie, and of Jasmine, of dead girls and missing girls, of certainty and uncertainty. My head began to pound and I felt a dread that was like sediment blocking the flow of my blood.

When Alice came in, I pulled her down. ‘Lie with me.’

‘You just called me Florrie.’

Durrant produces a twist soon after. I didn’t see it coming, although the ground had been laid for it. Nor did I find it entirely convincing. But never mind, it’s a clever piece of plotting and a neat means of guiding the novel to its conclusion.