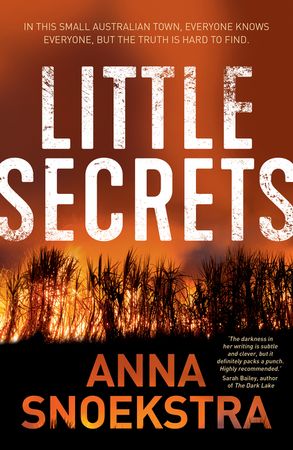 What happens when ambition trumps the truth?

A town reeling in the wake of tragedy…

An arsonist is on the loose in Colmstock, Australia, most recently burning down the town’s courthouse and killing a young boy who was trapped inside.

An aspiring journalist desperate for a story…

The clock is ticking for Rose Blakey. With nothing but rejections from newspapers piling up, her job pulling beers for cops at the local tavern isn’t enough to even cover rent. Rose needs a story–a big one.

In the weeks after the courthouse fire, porcelain replicas of Colmstock’s daughters begin turning up on doorsteps, terrifying parents and testing the limits of the town’s already fractured police force.

Rose may have finally found her story. But as her articles gain traction and the boundaries of her investigation blur, Colmstock is seized by a seething paranoia. Soon, no one is safe from suspicion. And when Rose’s attention turns to the mysterious stranger living in the rooms behind the tavern, neighbour turns on neighbour and the darkest side of self–preservation is revealed.

Colmstock is a dried-up regional town. Twenty-something Rose dreams of a career as a city journalist; she knows she’s better than Colmstock. But for now, she’s stuck working the bar at the local pub, night after night alongside her best friend Mia. She’s broke, there’s another cadetship rejection in her inbox and her stepdad wants her out of the house.

The town of Colmstock is in mourning. A recent fire at the local courthouse and milk bar claimed the life of a mentally challenged boy and no one has been charged with the crime. The mine has gone, the car factory has gone and for those left behind, there’s the poultry factory, meth or blind determination to hold the leftovers of the town together.

When Rose’s little sister Laura finds a porcelain doll on the front steps of their house, Rose calls the police. The doll looks eerily like Laura and Rose smells a story. This is not the first doll left on a doorstep.

To get closer to the action, and help out Mia’s love life, Rose finally accepts a double date with Frank the local sergeant and a fellow cop. Meanwhile, Rose is intrigued by a tight-lipped stranger staying in one of the shabby rooms in the pub, where no one usually stays. In a small town when things go wrong, it is not a wise move to be a stranger, especially when Rose’s story about the dolls is published in the tabloids.

Little Secrets is Anna Snoekstra’s second novel. The plotting is taut without wasting a single detail, and the writing is clear, concise and oh-so Aussie, with a backdrop of dust, ash and sweat.

Snoekstra’s characters are fully fleshed out and flawed. Every character has a pleasant outward face which hides their pain and shame.

Rose is ambitious and reckless, one-eyed in her desire for publishing credits. She’s gnawed by the feeling she’s wasting her life and when she gets a taste of the life she craves, she fails to consider the effect on her community or even stop to think about her own safety.

Kind-hearted Mia is Rose’s biggest supporter but she doesn’t share Rose’s dreams of joining her in the city, and as Rose’s ambition takes over the cracks widen in their friendship.

The masks of the characters in Little Secrets are exemplified by a roaming gang of neglected Colmstock kids known as the ‘paper-plates’. The kids wear paper-plate masks over their faces and wander Colmstock at night causing mischief.

Colmstock is held together by secrets, redundancies, illegal activities, crushes, illegitimate children. Tensions simmer below the surface of the town, and as Rose’s newspaper stories create panic and finger-pointing, friends and neighbours turn on one another to protect themselves and the town. Little Secrets raises the question about whether our constant diet of tabloid journalism has led us to immediately see the worst in others, without questioning the facts.

Little Secrets is a tense and gripping look at ambition and misunderstandings, with a glimpse at the quiet despair rumbling underneath regional Australia.