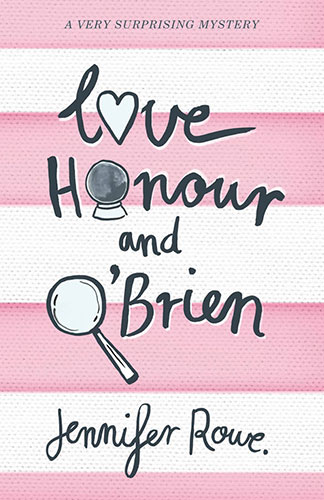 Author: Jennifer Rowe
Publisher: Allen & Unwin
Copyright Year: 2011
ISBN: 978-1-74237-583-0
No of Pages: 360
Price: $22.99
Review By: Karen Chisholm
Book Synopsis:
Holly Love’s in big trouble – she’s got to find the cheating swine who ripped her life apart, which turns out to be a huge mystery involving a gloomy old house, a hearse-driving Elvis impersonator and a gang of vengeful thugs – not to mention a possessed parrot and a very cute guy who might just take her mind off all her woes! A funny and hugely entertaining mystery from a brilliant storyteller.

I do like a bit of a romp novel, and LOVE HONOUR AND O’BRIEN is nothing if not a bit of a romp. Which surprised me a bit – because the blurb sounded just a little dauntingly like it might be too chick-lit for me.

But Jennifer Rowe’s return to mystery writing has hugely exciting, so exciting I picked up this book as soon as it arrived.

Set in the Blue Mountains (Rowe’s home territory it seems), LOVE HONOUR AND O’BRIEN is, you’d have to hope, the first outing of accidental Private Detective Holly Love. I say accidental as she starts out as an office worker who chucked her long-term (boring, cardigan wearing, pea

squashing) boyfriend and almost instantly agrees to marry Financial Advisor and stunner Andrew McNish. Which plan went rapidly to pieces on the night that she gave up everything in Sydney, and drove to the Mountains to prepare for the wedding. Only to find Andrew, and all her money gone.

we’ve been here before. What’s really good about LOVE HONOUR etc is that it does cover some well worn territory – but it does it with it’s own sense of style and humour. Holly is a great character – her man disappearing (along with everything in his house being repossessed around her) does not mean she packs up and runs home to mother – she hires a Private Detective. The Private Detective dropping dead does slow her down a bit – but moving into his flat, taking up his mobile phone and getting on with his job and looking after his parrot – actually works. Even the idea of a lunatic household / heirs of an undertaking millionaire – weirdly kind of work.

Okay so there’s not a lot that’s new here – and Holly’s one of those accidental Private Detectives that is more catalyst than resolver, but the sense of humour is wonderful, the pace is tremendous, the cast of supporting characters really vivid and the whole thing just well … works. Definitely a book more for fans of the lighter side of mystery fiction, and one in which readers will have to accept that there are things in Holly’s life that may just need a future instalment. Rowe has once again proven herself to be a particularly dab hand at developing strong female characters, and building a plot and story around them that’s engaging, hugely entertaining and quite clever.