Love You To Death by Megan Norris 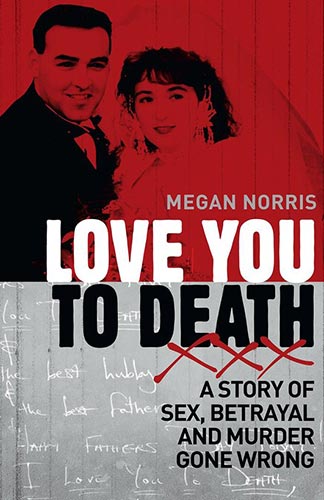 Author: Megan Morris
Publisher: Five Mile Press
ISBN: 9781743461266 (pbk)
Review By: Suzanne Bozorth-Baines
Book Synopsis: Once again, journalist and 2008 Eliminating Violence Against Women Media Award (EVA) winner, Megan Norris turns her skills to writing true crime with the story of the attempted murder of Chris Soteriou. Beginning the story with the attack of Soteriou after his lavish 40th birthday party celebration on a street in Fitzroy, Norris builds the picture of a Greek couple who have everything—beauty, wealth, financial security, a loving family and children, and above all, love for each other. It’s only after Soteriou begins his battle for life in a Melbourne hospital that the reader is exposed to the questionable behaviours of Vicky Soteriou, Chris’s wife, and to consider that things are not quite as they seem. The plot then clearly begins to unfold leaving Vicky Soteriou as not only an attempted murderer, but also as an adulterer.

Norris writes evenly, generally without malice, echoing Chris Soteriou’s shocked disbelief in the guilt of his wife in not only attempting his murder, but in conducting affairs during their supposed idyllic marriage. “Why?” is Soteriou’s constantly painful refrain. She also explores the pasts of both Chris and Vicky. This story of attempted murder is so hyper dramatic, it caused the online Hellenic Forum to say that “…it bore all the hallmarks of a Greek tragedy”. This story leaves the reader shaking their head wondering at the complicated lives in which some people seem to involve themselves.

Norris has done an extensive job of interviewing the family, interpreting medical evidence, and explaining courtroom procedure. The reader becomes caught up in the Soteriou extended family as Norris brings their feelings and observations close to the fore. She easily leads the reader to understand Soteriou’s on-going trauma and his eventual way of dealing positively with his losses.