Lucky Me! Q&A with Saba Kapur 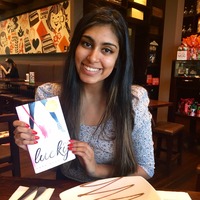 Q&A. National Co-convenor Robyn Walton talked to Saba Kapur, author of Lucky Me (Amberjack Publishing, New York, 2016). Lucky Me is a crime mystery for Young Adult readers and a debut novel for Saba, a Melbourne university student. It was launched at Readings bookstore in Hawthorn Melbourne in June 2016.

Hi Saba. Let’s look at the crime and investigation content of your novel before I ask a little about the writing of the book and where you go from here.

A culture that promotes celebrity and financial success can also generate crimes such as stalking, extortion and abduction. You set your novel in Los Angeles, where Gia Winters ‒ the high-schooler daughter of rich, successful actors ‒ is receiving menacing calls and messages. Given the global nature of entertainment media, this storyline could have been set in other communities with celebrities and enviable lifestyles.  What were your thoughts about celebrity and location as you devised your plot?

The main motivation for my setting came from observing popular culture amongst my generation today. Young people are fascinated by American celebrities, money and fame, and for me there was no better place than Hollywood to encapsulate all three. I wanted the location of the novel to be appealing to young readers, but also provide a kind of critique of the world we idealise by highlighting some of the dangers of stardom.

Gia tackles the role of amateur investigator after poisoned food at a party puts her boyfriend in hospital. In a backroom of a restaurant she discovers an item that tells her she was the intended victim. She comes away from a fraternity house party with more useable evidence. Beginner’s luck, or is this a girl with a future as a PI?

I think it might be a bit of both! Gia’s investigations are usually conducted on impulse and often tend to go awry, but she’s clearly got a knack for the business. I would say she’s a naturally curious person, so when you mix that with her stubbornness and her anxiety about her stalker, it gives her great motivation to go out and take the matter into her own hands. You never know where that curiosity might take her. Gia loves having an attractive guy as her side-kick. Her flirtatious young bodyguard is always nearby, and she is accompanied to the frat house party by a handsome police cadet. So there’s plenty of URST (unresolved sexual tension). Were you influenced by any investigative TV or film duos?

Gia and her love-interests have been shaped by many TV/film influences, and when it comes to the investigative side, there are a few great crime-fighting duos that come to mind. I absolutely love the banter between Richard Castle and Detective Kate Beckett (from the TV show Castle). Their love-hate relationship definitely helped shape a lot of the witty comments and dry humour between Jack and Gia, particularly in their initial interactions. Although they may not have directly influenced my writing, I also love the playful relationship between Detectives Jake Peralta and Amy Santiago (from the TV show Brooklyn Nine-Nine). It can be very refreshing to have an element of comedy amongst crime.

Fears for Gia’s safety intensify as she prepares to appear on stage at an awards gala. Both the LAPD and FBI are involved by this juncture. Did you put much effort into giving a credible representation of US policing?

As a criminology student in Australia, I only had basic understandings of the American justice system and police. However, I wanted to make sure that my depictions were as accurate as they could be, so I did a lot of research on police/FBI practices, roles and processes. This was particularly when shaping the character of Milo Fells. I wanted the presence of law enforcement to be authentic, whilst still contributing to the drama of the plot.

When it comes to understanding the chief wrong-doer’s frailties as they’re exposed in the cinematic climax of the story, Gia proves to be insightful. Wrong-doers are not punished as cruelly as they might be, and you do not allow in much violence or gore. Any comments?

Realistically, Gia’s wrong-doers wouldn’t get away with half of what they managed to achieve! But as Lucky Me is a young adult novel and is targeted at teenagers, I wanted to ensure that the genre didn’t fixate too much on violence and crime. I also wanted the climax to be carried out in the true dramatic and even exaggerated Hollywood fashion. For me, the theatrics of the crime needed to be more present than the actual crime itself.

You name check actors, films, TV shows, musicians and clothing designers from the last few decades. One of the movies, Clueless, was an adaptation of a Jane Austen novel. Could your novel be read as a comedy of manners merged with a crime mystery?

I would definitely consider Lucky Me to be an intersection between crime and comedy. I like to think that the genres symbolise many of my personality traits. I’m extremely enthusiastic about studying crime and justice, which tends to be quite a heavy and serious subject. But I just can’t survive without humour. In many ways it can seem like a big contradiction, but still blends so well together. It’s Jane Austen with a dark twist!

Gia is a self-aware character who can think of herself as taking the central role in a teen genre entertainment: ‘A jealous boyfriend, a manipulative arch nemesis, a creepy stalker and a frustratingly good-looking bodyguard … I was the definition of a cliché.’ Were you content to endorse popular culture, or was there the temptation to transcend or subvert it?

I wanted there to be a lot of emphasis on popular teen culture because I know it would be relatable and appealing to my readers. There were many times when I thought about steering clear of the clichés and popular tropes because I felt that they were too overdone. But ultimately I realised that those clichés were overdone for a reason: people love them. I love them! I think sometimes a little predictability in an unpredictable storyline can be reassuring for the reader.

That being said, the emphasis on popular culture was also written with a bit of satire in mind. Following the theme of theatrics in Hollywood, I wanted each character to play into their exaggerated and stereotypical moulds, but still manage to defy it in their own way. Gia is a great example of that. She can live up to the expectations of tantrums and materialism, but when it comes to her investigation, she doesn’t like to consider herself a damsel in distress.

Fashion is a high priority. Gia has a walk-in closet that ‘smells like happiness’. She embodies wish-fulfilment for many teenage girls, rather in the way Kerry Greenwood’s Phryne Fisher character has clothes and skills that women can admire. You had fun writing Gia and her girlfriends and mother?

My love for fashion played a huge role in shaping Gia and her friends. Gia’s sense of style was so important because I wanted it to add authenticity to her location and personality. High-end brands and accessories are a huge part of Hollywood glamour and thus a necessary part of the novel. But for Gia, it also acts as a boost of self-confidence. Styling the women in Lucky Me was so much fun! It was like I was able to live out all my fashion desires by vicariously stepping into their expensive shoes.

The novel is strong on dialogue. When Gia is not being sassy or whiny she is capable of some clever plays on words. How did you feel writing all the action in Gia’s voice and from her point of view?

I really loved writing from Gia’s point of view. In reality, Gia and I share similarities but are ultimately very different people. She is quite impulsive and immature, and I’m completely the opposite! But we do share a love for sarcasm and quick wit, so it was so much fun being able to incorporate elements of my own personality into her dialogue. I tried to use those elements to ensure she was relatable to teenage emotions and angst, despite her wealth. Gia can also get away with saying a lot more than I could in reality, so it was great to be a little adventurous with the dialogue!

You end Lucky Me with the prospect of Gia moving to New York to enrol in a university there, with her police buddy and her bodyguard also heading to the East Coast. Meantime, in real life, you’re studying criminology and international relations in Australia. Can you tell us anything about what your future, and Gia’s, may hold?

At the end of Lucky Me, Gia is just finishing high school and is still very sheltered in her privileged lifestyle. Leaving Hollywood and starting university will really send her out of her comfort zone. The sequel, which I am currently in the process of writing, will see Gia leave behind what is familiar and force her to do some growing up. In a way, it is like she’s about to enter the real world. You can expect that her future in New York will hold lots of eye-rolling, fancy handbags, lame jokes and of course, plenty of mystery and crime.

As for me, I am in my final year of my degree and am so excited (and truthfully a little nervous) about what my future holds. It would be especially great to work in the field of criminology and actively pursue my passion. You never know, Gia’s amateur investigation skills might just rub off on me!

Finally, have you and Gia any advice for teenagers and young women who like writing and aspire to publish a crime story or novel?

Crime is a genre that is often associated with masculinity because of the presence of violence and aggression. But some of my favourite crime novels have been written by incredible female authors, such as Gillian Flynn. To any young woman hoping to write crime fiction (or any novel for that matter), my advice is to not shy away from a genre that may seem a little unfamiliar, unexpected or new. I never once thought I could actually write a novel relating to crime, even with my enthusiasm for mystery. It took a little bit of experimenting and lots of trial and error, but eventually the criminal aspects of my book were among my favourite parts to write. It can be a difficult process, but it’s definitely worth the effort.

If writing from Gia’s perspective has taught me anything, it’s that sometimes you can’t wait for someone else to do the hard work for you. You just have to slip on your stilettos, wing your eyeliner and get to investigating.

Thanks for your answers, Saba.