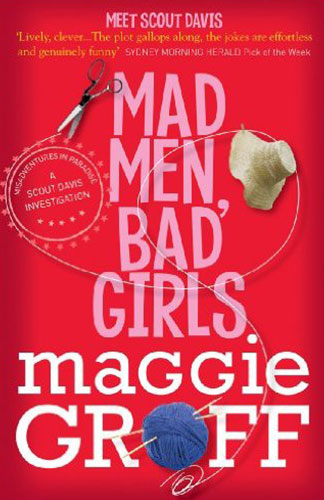 The cult isn’t the only case on Scout’s agenda. Someone is cutting up girls’ underwear at an exclusive school and Scout agrees to look into it. And the sinister secret behind the vandalism is not nice. Not at all.

But Scout has her secrets too. In the dead of night she sneaks out with an underground group of yarn bombers to decorate the locality with artworks. The next mission ticks all the right boxes – it’s risky, difficult and extremely silly. However, not everyone is amused, and Scout has a sneaking suspicion that the local police sergeant, Rafe Kelly, is hot on her tail.

Yearning for a virtual vacation? What about contemporary Byron Bay from the perspective of a diabetic freelance journalist or the former Kingdom of Laos circa 1978 with a septuagenarian coroner?

In Mad Men, Bad Girls and the Guerilla Knitters’ Institute, Maggie Groff has sly fun at the expense of ’Bonking Bay’: a place that hardly needs more tourists in the all too solid flesh clogging up the byways. And yet who would not be attracted to a town ‘already full of industrial-grade lunatics’, as it is described on the first page, albeit by someone who doesn’t live there.

Scout has a sister called Harper, a Russian Blue cat called Chairman Meow, a boyfriend on extended tour in Afghanistan for Reuters, and the hots for a local cop called Rafe. She is also a fully paid up member of the Guerilla Knitters’ Institute whose activities involve enlivening public spaces with unlikely knitted artworks.. Given our local post office has what looks like a knitted teacosy adorning the nearby junction box, I’m inclined to think ‘yarnbombing’ is about to go viral on the Eastern seaboard.

Apart from the adventures of the guerilla knitters, there are two other plot lines on the go. The first involves the arrival of a suspicious (is there any other kind) American cult headed by the kind of dodgy sexual predator any right-thinking woman would spot a mile off. But then right-thinking women are hardly ever the victims of such enterprises as Scout discovers as she goes undercover to get the lowdown on her story.

The second involves Scout’s sister Harper (onomastic codes courtesy of Miss Lee), who needs assistance sorting out some nasty bullying at the posh coeducational school where she teaches gymnastics.

It’s all a bit chick- litty, Janet Evanovichy and perilously close to cute – but fun, especially the knitting.

This debut novel by Maggie Groff is instantly appealing – there’s the great title, yarn bombing, the Byron Bay setting and the delicious names of Scout and her sister, Harper. Scout Davis is a freelance investigative journalist given the job of investigating an American cult which has moved to the Gold Coast. She is also asked by her sister to quietly look into who is cutting up students’ underwear at an exclusive girls’ school.

Marketed as light relief, à la Janet Evanovich, there is more to Mad Men… than a kooky and impulsive accidental investigator stumbling from one crazy scenario to the next. For one thing, Scout is a bit older than the usual protagonist of such books, and for another thing, she’s not actually kooky, irrational or silly at all. Sure, there are raging hormones and a sexy love interest, but Maggie also deftly tackles some very sensitive issues. What she handles so well is the balance between the humour and dark subjects, such as losing a loved one to a cult and bullying. This is a very impressive debut, and Maggie Groff, and her heroine, Scout Davis, are welcome additions to the Australian crime writing scene.