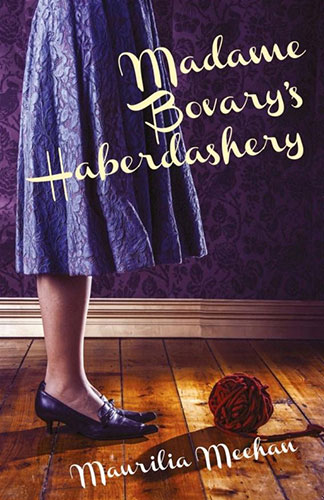 In a plot that plays with the conventions of the mystery, and delightfully subverts one of its treasured finales, this delicious novel is not afraid to be literary and fun and sexy all at once. Award-winning novelist Maurilia Meehan deftly pays homage to both Christie and Flaubert, while also creating a true original: the first in a series of delightful page-turners for lovers of noir, passion and great literature.

Odette meets Zac, who is portly, in his early 40’s and lives at home with his mother, in between unsuccessful relationships. His ‘life’s work’ since his 35th birthday has been writing the definitive translation of Flaubert’s Madame Bovary and he compares his own circumstances to those of Flaubert, even growing a Flaubertian moustache.

Zac moves in with Odette and Cicely bringing with him his meagre possessions and Odette and Cicely share Zac for short time but Cicely tires of the sex with Zac. Zac then becomes jealous of the fact that Cicely has been published and he hasn’t and he convinces Odette to move out with him. Odette has always taken on the life of her latest lover, so she moves out with Zac and under pressure from Zac, Odette eventually ceases all contact with Cicely.

It is a clue to the progress of the plot when we are told that Cicely has a photo of Agatha Christie on her wall and Agatha appears in Cicely’s dreams. So, the poor, put upon Cicely starts to investigate her friend’s disappearance in true Agatha style. She believes that Odette has been murdered and she compiles a list of five suspects after hacking in to Odette’s email and discovering that Odette had a website offering her services to men.
A parallel story is the life of Miss Ball from the Haberdashery Store where Cicely purchases her knitting yarn. Miss Ball is also very similar to Cicely in that she has not kept up with the world and as a result her business is in trouble. She has a recalcitrant sister she supports who, similar to Odette, goes from one bad relationship to another. Miss Ball also identifies with Madame Bovary, in that she has also purchased things on credit that she can no longer pay for.

My enjoyment of this novel came from the fact that it is a very different treatment of the crime novel and at all times was unpredictable. Having recently reread Madame Bovary and being an avid fan of Agatha Christie, I was enamoured of this novel from the first page to the last word and in awe of Maurilia Meehan for her talent in being able to, so superbly, capture the essence of a great work of literature and the logic of Miss Marple in a work of crime fiction.