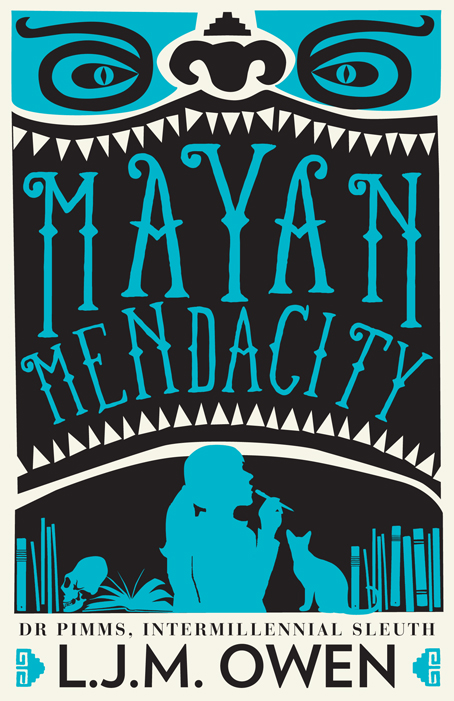 What is the story behind the tiny skeletons discovered on a Guatemalan island? And how do they relate to an ancient Mayan queen?

The bones, along with other remains, are a gift for Elizabeth. But soon the giver reveals his true nature. An enraged colleague then questions Elizabeth’s family history. Elizabeth seeks DNA evidence to put all skeletons to rest.

A pregnant enemy, a crystal skull, a New York foodie, and an intruder in Elizabeth’s phrenic library variously aid or interrupt Elizabeth’s attempts to solve mysteries both ancient and personal.

Set in Canberra, and in the Mayan empire in what is now Guatemala, Mayan Mendacity is the second in L.J.M. Owen’s Dr Pimms, Intermillennial Sleuth series. It is a challenge setting up the next book in a series and Owen has done so with finesse. The narration is light, buoyant, playful at times, yet ever observant, the result, a most satisfying read.

The main plot is driven by protagonist Dr Elizabeth Pimm’s new volunteer project, given her by the exacting Dr Marsh. She must assess an archeological find, the remains of a cesnote in Guatemala, meeting a series of crushing deadlines. Elizabeth’s pursuit of answers to the mysteries of the find is continuously thwarted as a number of complications beset her. Obstacles and challenges come from all directions, enough to make the weak among us buckle, but not Dr Pimms.

Owen has created a convincingly flawed and utterly lovable protagonist. She’s determined, dedicated, thorough and loyal. She sallies forth with gung ho exuberance, never down for long, no matter what befalls her. Elizabeth’s attitude is probably best summed up when she confronts another disaster and asks herself, ‘What fresh new hell was this?’

Dr Pimms is supported by a cast of characters, all rounded out and believable. The reader is introduced to each in turn as the story unfolds and a secondary plot emerges, one that is deeply personal. Indeed, it is Dr Pimms’ own history that thwarts her investigation, yet ultimately leads her to mature and open her heart.

The story is thoroughly researched; the author clearly knows her themes and her setting. Technical details are provided in an engaging, easy to follow manner. This is especially evident when Owen opens a window on the fascinating world of the Mayan empire, making use of a parallel narrative to take the reader back to the time of Dr Pimms’ find.

Elizabeth’s phrenic library is an interesting addition to the narrative, a fascinating invention, one that creates a curious occult dimension to Owen’s series. This phrenic library is a personal and mundane version of the Akashic records, a metaphysical compendium of all that has ever occurred in human history, stored on the inner planes, according to Theosophical belief. As a device, Elizabeth’s inner library works well, granting her plausible, if esoteric, access to knowledge she would otherwise be hard pressed to gain.

In all, I found Mayan Mendacity difficult to put down. Owen has provided her readers with an entertaining story that also informs, without allowing exposition to put a brake on the narrative. Pulling off a story laden with this much technical detail and maintaining a fast pace is quite a feat.

A combination of light chick lit, academic mystery, and dark historical crime fiction; Mayan Mendacity is the second book in a series by L.J.M. Owen.  Like its predecessor (Olmec Obituary) it revolves around the efforts of Canberra librarian and frustrated archaeologist Dr Elizabeth Pimms to solve the mystery of a collection of artefacts given to her to analyse. In this case, it’s a collection of bones from a Mayan site which don’t make archaeological sense.

While Elizabeth Pimms is navigating her way through a morass of personal issues revolving around her multicultural family, romantic disappointment, career insecurity, conflict with an unstable workmate, and the mystery of malicious tampering with her work; the parallel story in the book plunges us into the violent culture of 7th century CE Mayan empire.  There we meet Lady Six Sky whose daily concerns are political manoeuvrings, blazing a ruthless trail as a woman with unconventional success, and literally the life and death of herself and others.  I have the strong feeling that Lady Six Sky with her treasured Red Jaguar wouldn’t waste a tenth of a second in cutting a swathe through Canberra politics that would leave the kingmakers of our political parties bleeding out in the red dust.

In this (and in Owen’s first book) it is in the playing out of the ancient mystery that this book really came alive to me.  The Mayan characters are drawn large with a strong confident hand, their culture is fleshed out with striking details, the plot grabs, and Lady Six Sky engages our sympathy despite her ruthlessness.

Owen gives us unexpected solutions to Elizabeth Pimms’ family and work mysteries, with one of these an option that I didn’t know even existed.  The denouement in the ancient jungle has a shockingly barbaric twist.

This mystery novel bounces between light and dark. The everyday angst of a young academic surrounded by family, cats, and foodie recipes; is punctuated by short interludes where we step into a world far darker than the imaginings of our benign culture.  Owen’s detailing of the processes of analysing bones and artefacts will delight those fascinated with history and archaeology. In the Mayan segments, Owen’s expertise and passion masterfully brings us along with her into a vivid ancient world.

Various characters on the edges of Olmec Obituary have become central in this second book and several fringe characters are deftly introduced in Mayan Mendacity ready to step on stage in a third book of the series.  As Elizabeth Pimms gets ready to leave family and cats for a trip to Egypt, I can’t help hoping that the third book will devote a greater proportion of space to Owen’s bold creative imaginings of the ancient world’s dark past.