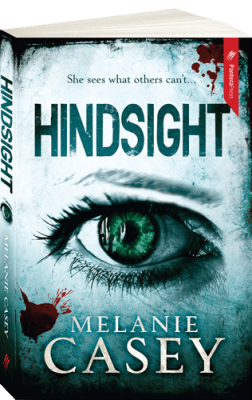 The youngest in a family of extraordinary women with supernatural talents, Cass is cursed with the not-so-sexy gift of seeing the past… but not just any past; she sees death.

Fo years she’s hidden herself away in her family home. Now desperate for a better life, she ventures into sleepy Jewel Bay, only to stumble upon murder and mayhem and a killer at large who’s been lurking in their midst…

Taking a chance, Cass volunteers to assist Detective Ed Dyson with the investigation. Will Cass be able to save the latest victim… and herself?

Cass Lehman knows a lot about cosseting love and cosiness. The family home in Jewel Bay is occupied by three generations of Lehman women – Gran, Mum and Cass – along with Shadow the cat. It’s a place of wholesome home-baking, comfortable old armchairs, and psychic and healing gifts either restrained or used for good. In her Cass Lehman series, author Melanie Casey repeatedly dislodges her protagonist from this comfort zone by involving her in crime scenarios that put her and her family at risk. The outcome is a likeable series melding the thriller, the crime procedural, the paranormal tale, cosy crime fiction and the romance tradition. Underlying the narratives are allusions to Classical and Shakespearean drama and sensational and popular texts from the nineteenth and twentieth centuries. If you pick these parallels, you have the added interest of seeing how ingeniously Casey creates a modern-day variant, but it’s by no means necessary for readers to detect influences.

Cass’ psychic gift, retro-cognition, is a thing of terrifying intensity and inhibiting unpredictability. If Cass finds herself on the spot where a person has lost their life, she has an overwhelming ‘vision’ in which she experiences that death as it was for the person dying. Horrible deaths by way of murder, suicide and accident are so distressing to vicariously relive that any such vision leaves Cass exhausted. Understandably she is rarely willing to go to known or possible death sites. Hospitals, lookouts, road black-spots: all are places Cass avoids.

In Hindsight, the first of three novels, author Casey starts her series by nudging her protagonist out of her self-imposed seclusion. Several forces prompt 28-year-old Cass to venture into town, initially in the company of her mother and then alone : the consciousness that she needs to do something with her life, the hope of identifying the assailant of a local woman who died following an assault, and the prospect of working with careworn detective Ed Dyson, to whom she’s attracted.

Where there is a civilian gifted with retro-cognition and offering her assistance there is going to be an investigator willing to despatch her to crime sites. Enter DCI Natalia Sorensen, a friend of the Lehman family and Detective Ed’s superior officer. There are also likely to be police derisory and hostile toward supposed psychics. Enter Ed’s partner, Phil Steiner. As for Ed, his attitude lies somewhere between these extremes. He is eager to identify killers and abductors, especially if they may have anything to do with the disappearance of his pregnant wife two years earlier, and he has to concede that through her visions and observations Cass can supply useable information. However he is uneasy when near this strange, old-fashioned young woman and increasingly anxious about her wellbeing as she experiences a cluster of visions that to the outsider look like epileptic fits. With Ed’s moods veering into depression and explosive rage, Cass’ impulse to establish a connection with him is not easily realised.

To this fraught mix Casey adds a further complication. Officers from the state capital, Adelaide, bring the revelation that the dead woman was living under a pseudonym in witness protection; they’re keen to take over the case. Formulaic plotting, yes, but Casey deploys her material capably. The pacing is assured, with frequent use of dialogue to carry the story. In both the chapters narrated in the first person by Cass and the chapters told in the third person to advance the police investigation and the criminal activity there is liberal use of clichés and occasional dodgy grammar. This has the benefit of giving readers an easy read in colloquial language, and the demerit of irritating those of us who’d welcome more precision and individuality in the prose expression. Here, as a sample, is Casey’s take on the trope of a hung-over detective being woken by an early call-out:

Ed Dyson felt like he’d been beaten about the head with a blunt object. His eyes were stuck together with sleep and his tongue had grown its own shag pile rug.

He’d spent the night before with a bottle of the best Irish his limited resources could afford and Jeff Buckley to keep him company. When the phone screamed into his consciousness it was like surfacing from a deep, black pool. He looked blearily at the clock for long enough to register that it had just gone 5 AM. He took the call with a deep sense of dread.

And here is Cass waking:

When the alarm went off it still felt like the middle of the night. I woke up tired and out of sorts. My eyes felt like someone had thrown a handful of sand in them and my arms and legs were leaden.

I’d spent most of the night tossing and turning and trying unsuccessfully to shut my brain down for long enough to fall asleep. Even Shadow gave up on me halfway through the night and went off on a night-time prowl instead of hogging the bed like he normally did.

Provided you’re comfortable with this homely style of narration and feel empathetic enough with the lead characters to walk and drive with them through the investigation of an improbably high number of disappearances and killings in a regional setting, you’ll find Hindsight a good leisure-time companion.