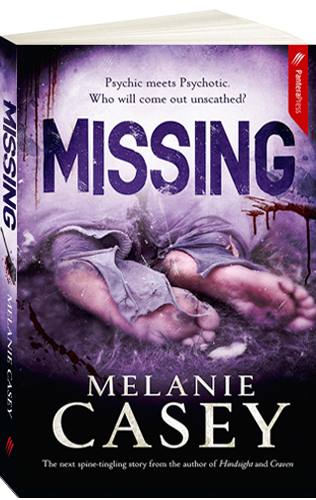 Someone is targeting Adelaide’s homeless. Men are disappearing off the streets, and body parts are turning up in a local dump.

Still haunted by her last run-in with a serial killer, Cass Lehman is trying hard to focus on the future. That’s not easy when she has the ‘gift’ of retrocognition … the ability to spontaneously re-live the last minutes of a person’s life.

Cass and Detective Ed Dyson are now trying to make a normal home together, but when she gets entangled in Ed’s latest case things are far from normal.

A twisted tale of love, desperation and murder … When the psychic meets the psychotic, who will come out unscathed?

South Australia’s picturesque McLaren Vale on the Fleurieu Peninsula is best known for its wineries, and in Chapter One of this third thriller from Melanie Casey we join freelance editor Cass Lehman in an Adelaide restaurant as she shares a McLaren Vale Shiraz and a pizza with her friend Claire.

In the Prologue we have already walked alongside a man who, with only small change in his pocket, is trying to find shelter and food but is rudely rebuffed by a group of men inured to sleeping rough and driving hard bargains. And in Chapter Two we will travel with Ed Dyson, the Major Crimes detective with whom Cass lives, as he heads out to the McLaren Vale rubbish dump where putrefying body parts have turned up. Thus the thematic contrast which dominates the novel is set up: the haves versus the have-nots and have-no-longers. The pleasures of aromatic cookery, healthy eating and drinking, sociability and homeliness, gemütlichkeit, co-exist even in developed nations with chronic hunger, scavenging and homelessness, foul odours and mouldering clothes.

Dementia, we learn, is a common concomitant of homelessness. The 60-something man who once had work and security may now be straying on the streets of an Australian city, out-of-touch with family and friends or distancing himself from unsatisfactory relationships. Alienated, confused and deprived, he is vulnerable to both random and targeted attacks. The missing and homeless die prematurely.

While Ed and his fellow investigators feel sympathy for such victims, it is psychic Cass who (potentially) can empathise. Using her gift of retro-cognition, she can stand where a person died or touch bodily remains and experience what it was like for that person at the time of death. Cass recalls an interesting coincidence from one previous exercise of her talent (in Craven): “It was the first time I’d realised I could have a vision from touching a body. And it was also the day Ed and I had slept together for the first time.” Death and sex and food, they’re tried and true ingredients of genre fiction.

With Ed’s superior officer, Crackers, having engaged Cass to apply her gift to case solving, and old school white-knight Ed wanting to protect Cass from distress, what will happen this time around? Venturing to the Adelaide morgue on Crackers’ instruction, Cass touches the body remnants from McLaren Vale and has an unhelpfully incomplete vision: the victim was experiencing blurred sight, felt sleepy and could smell savoury food. Ed reacts with pleasure: “He didn’t want Crackers to think I was useful and keep me on the team.” For her part, Cass is disappointed that her talent has not shown itself more powerfully and is so annoyed by Ed’s reaction that she has to restrain herself from “unleash[ing] a stream of vitriol in his direction”. In conciliatory mode Ed steers Cass to a cafe named BTS (Better Than Sex): “They do coffee and really good cupcakes …” Before they’ve finished their coffees Ed receives news that the cadaver dog has sniffed out more body parts at the dump. He sets out again for McLaren Vale, and this time Cass comes along with him.

Having been struggling to live harmoniously with Ed, Cass has been craving the loving solicitude of her family back at Jewel Bay, also on the peninsula. Ed drops Cass off at the home of her mother and grandmother, where a comforting home-cooked meal is soon on the table. Following lunch, Cass is sitting contentedly in the sun, “sliding into a food coma”, when melodrama intrudes: a mentally ill serial killer with whom she and her mother had previous contact has escaped from his secure facility, killed someone and stolen a car, and it’s feared he is now on the way to the Lehman home.

From this point, at the end of Part One, Missing pursues its cluster of narratives through another 250 pages, providing a good-value reading meal for anyone who relishes Casey’s brew of police procedural, violent thriller and cosy Krimi heightened with paranormal spice.