Miles Off Course by Sulari Gentill 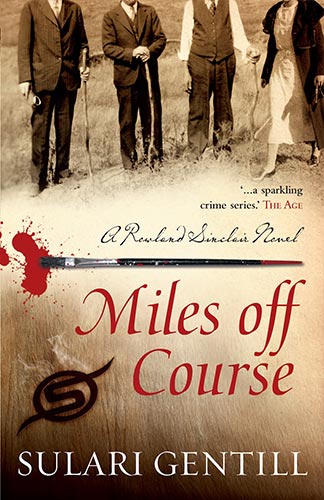 When I tweeted recently that I was on the train to Melbourne from Ballan reading an advance copy of Sulari Gentill’s new novel Miles Off Course, an Aussie crime fiction blogger promptly tweeted back ‘I am jealous enough to meet your train and mug you for your copy of that book’.

Such is the devotion Gentill inspires in fans of the Rowland Sinclair series set in the late-1920s and early 1930s in NSW and beyond.

Miles Off Course is the third book in the series and opens at the luxury Hydro Majestic hotel spa at Medlow Bath, where Rowland and friends are ensconced, his only burden a temperamental artist’s model. Rowland’s love interest and muse, Edna Higgins, is receiving treatment at the spa after recovering from an attempted poisoning at the end of the previous book, A Decline in Prophets, until she is ‘jolly sick of baths’.

When Rowland is despatched by his disapproving but loyal older brother Wilfred to the High Country in search of their missing foreman, a Wiradjuri man called Harry Simpson, his friends naturally tag along. Their journey takes them through Gundagai ‘to see the already celebrated monument which had been unveiled by Prime Minister Lyons a few months before’, to Tumut, Batlow and the Yarrangobilly Caves. The Tumut valley is the author’s own stomping ground and you get a sense of the glee with which she sets her characters loose in this landscape.

For me the book really takes off when Roland and his Bohemian entourage arrive at the Rope’s End camp in pursuit of Harry Simpson and without giving too much away, all hell breaks loose. Just when I was getting tired of Roland’s stiff upper lip, Gentill provides a glimpse of the passion that lurks beneath the paint-stained waistcoats and tailored suits.

Speaking of clothing, I had a laugh out loud moment when Roland after a near-death experience is reunited with his brother Wilfred, whose first reaction is, ‘Good Lord, man, where’s your tie?’

Miles Off Coursewas typical of Gentill’s entertaining and engaging novels in the Rowland Sinclair series until it neared the end, when it took what was for me a really interesting and poignant turn as a character whom I won’t name tries to convert Rowland to communism.

‘…You jumped in fists flying. You did that rather a lot back then – quite the angry young man. What happened to you, Rowly?’

‘Rather a shame, really. There’s a lot to be angry about now. Inequity, oppression, persecution – you could be so valuable to the cause, Rowly. Don’t you want to have some purpose – have your life mean something?’

I read Rowland’s response – ‘I grew up’ – as ironic. Whatever the case, Gentill lets the reader glimpse the less likeable side of Rowland Sinclair’s character, the indifference and indolence that come with never having to work for a living. She also does a great job of communicating big ideas without ever coming across as didactic.

As in the previous novels in this series, Gentill’s fictional characters get to cross paths with historical figures. Look out for a hilarious cameo by infamous ‘Razorhurst’ brothel madam Kate Leigh.

The unspecified circumstances of Harry Simpson’s life and the hints of Rowland’s past as an angry young man hang tantalisingly in the air at the end of the book. I’m dead curious to see what happens to Rowland Sinclair in Paving the New Road, the next book in the series. Gentill plans to send him to Germany in 1933 to defend Australian democracy from the onslaught of Fascism. Will Rowland Sinclair be forced to take a stand? Will he really grow up?

Not sure what’s weirder, talking to fictional characters, or the feeling that you actually know those fictional characters… Either way, you have to think it’s quite a feat for a writer to get you to the stage where you’re more than happy to regard her characters as real people.

MILES OFF COURSE is now the third book from Sulari Gentill featuring Rowland Sinclair and his band of supporters – Edna, Milton and Clyde and that feeling of connection, of reality and authenticity continues … in spades.

The connection is probably helped by the way that Gentill sets her characters and her stories in differing, and frequently real settings.

Whilst MILES OFF COURSE starts out at the luxury Hydro Majestic Hotel and spa, it ends up deep in the High Country, often in significantly less luxurious circumstances, although one property owner’s pride in the running water and other mod cons was particularly illustrative of the difference in times (this book is set in 1933 after all). But the move to the High Country and the Tumut valley in particular comes as Rowly’s brother Wilfred despatches him in search of their missing foreman, Wiradjuri man Harry Simpson, a long time and much trusted employee of the Sinclair family who has disappeared in highly unsatisfactory circumstances. As Rowly, and his entourage move into this environment, it’s very obvious that we’re in a part of the world that the author knows and loves. The sense of place becomes almost palpable and there’s a real feeling for how the High Country looks, feels and grows into and around the story.

I have been a fan of these books since the first one was released, but intriguingly in MILES OFF COURSE I think I see a little deepening of character, a few glimpses of, maybe not so much internal crisis, as conflicts. Not surprising really as Gentill’s light touch with the storytelling should not be misread as light-weight. Whilst there is humour and a certain insouciance that seems to fit with the born to wealth and privilege background of Rowly, there were points at which something deeper revealed. Whether it was the internal bored playboy peeking out from under the mantle of social conscience, or whether it was deeper, private passions more starkly drawn, Rowly is not everything he seems. Nor is his brother Wilfred quite the stuffed shirt he seems; Milton as shallow; Edna as assured or Clyde as confident about his choices in life.

Given that this is now the third book in the series, to be honest I can’t make a definitive statement about whether or not you would be better to read the earlier ones first. Whilst there is ongoing character development, and you will get more from the series understanding the relationships between Rowly and his family, and his entourage the books would work on their own. But if you haven’t read the earlier books in the series, you really should. Gentill’s combination of factual events and places, built around the fictional undertakings of her cast of characters help to give the books a fantastic grounding, and a firm sense of place. Done, mind you, with the lightest of touches, and with the flair of a real storyteller, the books “feel” right and real and authentic, the stories are fast paced, nuanced, often funny, frequently insightful and just flat out darned good yarns.