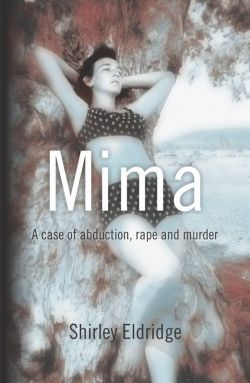 Author Shirley Eldridge and Mima Joan McKim-Hill were friends and colleagues working for the Capricornia Regional Electricity Board in Rockhampton in 1967 when Mima disappeared while on the job. She had been abducted, raped and murdered and her body abandoned.

Shirley tells this deeply personal story, starting with the events leading up to the abduction, and continuing through to 40 years later, with the re-evaluation of the evidence, the unravelling of the lies, and finally, the naming of the killer.

A young woman abducted, raped and murdered. How often do we hear that and register it with a dull thud around our hearts? Most of us move on because we have no connection with the victim. who then becomes just another sobering statistic. But Shirley Eldridge had worked with Mima McKim-Hill at the Electricity Board in Rockhampton in the sixties and was a friend of hers. Mima’s unexplained violent death and its subsequent poor handling by the police investigators, the Queensland police force being then at a possible all-time low ebb, left a profound effect upon her.

Years later, at the age of fifty-eight when she had raised a family and left other employment, she begins to look again at the unsolved crime. She looks again at the coroner’s reports, boggles at the lies and carelessness of various witnesses, and seeks to raise it again with authorities. A journalist’s article flushes out another amateur sleuth similarly obsessed with finding the truth of Mima’s death. They exchange hundreds of emails as they chase down various leads and seek to piece together the circumstances of Mima’s last hours and who might or might not have been in the vicinity where her work vehicle was found, miles away from where her body was finally discovered.

The book is written with feeling and skill, deftly weaving in period details to give a sense of life for young women in ‘Rocky’ at the time. Sexual harassment at work was rife. and the girls’ superior was promiscuous there, and wont to give confusing evidence at the enquiry into her death. Eldridge and Trevor, the tireless questioner, seek out police at the time and later, family members, and anyone else they think could help. Frustrations multiply as many of the witnesses of the time grow old, forget, do not want to know, give yet more conflicting evidence, or leave positions of authority where they might have helped. To Trevor each so- called fact needs to be challenged and interrogated but oftentimes this leaves Eldridge in a state of collapse, the many unanswered questions doing in her head, and the constant reminders of her friend’s ugly death reopening the wounds in her heart. It is all very close to her.

The police officer who has been most helpful retires as they feel they are getting somewhere. His replacement is so busy, doing two jobs at once and dealing with well over one hundred cold cases, that he appears not to have Mima’s case as first priority. He is not telling them everything, however, as police intelligence is wont not to. At the end of this reconstruction, which reads like a police procedural and the desperate chase that it is, the detective is sure he has the identity of the killer. That he is prevented from proving this for sure shows again how the facts of life and death seem to laugh at justice. Eldridge’s deeply-felt and well-imagined account is her best effort to make sure this does not happen in Mima’s case, and that her life and death does not just pass us by. It is a worthwhile and compelling read.