The even better news is that a film is in the offing.

Here is an edited report from News Limited on 6 May 2015:

GLAMOROUS lady detective Miss Fisher is embarking on her most exciting adventure yet: a feature film adaptation shot in England and set in a variety of exotic locations around the world.

The makers of Miss Fisher’s Murder Mysteries report strong interest in the screenplay and are scouring the globe for an internationally recognised star to join the cast.

Head writer Deb Cox says a feature will finally give their larger than life character — played by Essie Davis — the big canvas she deserves, describing the tone as: “The same kind of tongue-in-cheek adventures on the big screen that Indiana Jones has managed for the last three decades.”

“There will be a UK shoot and an exotic location shoot and Phyrne will fly her light plane all the way, breaking aviatrix records of the day! Essie is currently based in the UK so that also works well for her,” Cox said. 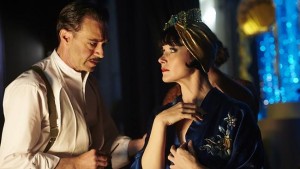 The hit show returns this week for a third season. With an average audience of 1.5 million viewers, sales to 120 territories around the world and a growing fanbase thanks to Netflix in the US, Miss Fisher’s Murder Mysteries has a level of brand recognition few other Aussie series can boast.

Every Cloud Productions has already turned down an offer from an LA producer to develop a US version of the series because the makers want to maintain the quality of the local one, but Cox says they’re “very interested in the potential for that” in the future.

“It could work beautifully in 1920s New York or Los Angeles,” she says.

Based in the UK … Hobart-born Essie Davis stars as Phryne Fisher in Miss Fisher’s Murder Mysteries.

Star Essie Davis also has a growing international profile, thanks in part to her role in The Babadook — a low budget Australian psychological horror film that drew rave reviews overseas.

On set at Ripponlea Estate in Melbourne during filming of season three, Davis acts coy when asked about the feature film plans.

“That’s top secret information,” smiles the actress, her signature black bob in stark contrast to today’s brilliant white tennis outfit. But she reels off her wish list for the film.

“There’s all sorts of amazing things you could do. There’s got to be horses, there’s got to be rickshaw chases, lots of building climbing, rooftop running, things like that!”

The 45-year-old says her favourite parts of the show are the action sequences, which last season saw her scale Parliament House and this season has Davis performing underwater escape tricks and racing motorcycles while being filmed by drone helicopters.

But she explains they often have to curtail action sequences as they “take quite a bit of time” — a luxury they can’t always afford as each episode is shot in just eight days.

“I’m always pushing for more action, but you know there’s all kinds of risks they don’t want me to take and there’s budget issues,” she says.

“I would love to do a movie of this with the right budget. I think it would need a budget that would make it achievable to look as brilliant as James Bond … But I mean, we do achieve an incredible amount on the smell of an oily rag!”…

Miss Fisher The Movie is unlikely to suffer that same fate [as The Babadook], if only thanks to its ardent fans — who mounted ahuge campaign to get the ABC to renew it after the national broadcaster dithered for a year (reportedly due to budget cuts and a desire to chase a younger audience.)

Season three offers a new and unique world in each episode, from the vaudeville magic theatre scene of the opener to astronomy at the Botanic Gardens’ observatory and today’s Great Gatsby-like tennis episode.

“At times she’s on even ground with Phyrne in terms of investigating and she’s really come into her own as a detective,” the 22 year old explains.

In real life Cummings looks up to Davis, seeing her as both a mentor and a friend, and says they disclose everything to one another. “She’s one of the most important figures in my life, and I’m very lucky to have that relationship with her,” she says. Davis is a perfectionist with an eye for detail she says. “It’s really wonderful to see that despite the immense hours she has to work and how exhausted she is, while raising her two young daughters and trying to manage everything, she still has such dedication to the work.”

Cummings is clearly passionate about the series, revealing she moved frequently as a child and has had a nomadic existence as an actress. “This has been the most consistent thing I’ve ever had in my really and on a very personal level I was kind of devastated to think it wouldn’t go ahead,” she says. “I’m really grateful to the fans for their support and for getting season three happening.”

So they should probably start campaigning now for season four?

Festival of Phyrne in Melbourne (May/June) including tours, exhibitions, deathly dinners and speakeasies.