More than smoke and mirrors: The latest from ‘True Crime Queen’, Robin Bowles 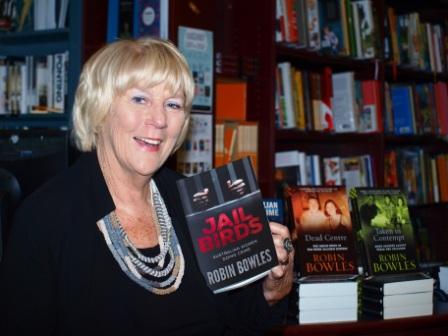 After a break of a couple of years, Robin Bowles True Crime Queen (and Sisters in Crime Life Member), has been pounding the keyboard with her single arthritic finger, wearing down her blue acrylic nail and writing three books since June last year!

The first, Smoke and Mirrors, released in August 2015, deals with the tragic tale of the murder of renowned interior designer, Melbourne’s Stuart Rattle. Stuart was murdered by his loving partner of 16 years, Michael O’Neill, who pleaded guilty to the whole catastrophe to save the families (and himself) the anguish of a long and salacious trial.

Many of Melbourne’s High Society dames were disappointed at being deprived of a free bit of judicial theatre providing an insight into the private lives of the Melbourne Housewives in the leafy suburbs and the high flying life of the A-Gays surrounding Stuart and Michael. It was the bizarre nature of the murder that attracted Robin –the whack on the head with a Le Creuset frying pan, then strangulation by a designer dog lead. Michael then brought drinks and takeaway curry in Ming bowls to the dead Stuart tucked up at home in bed for five days before the Melbourne summer in a first floor bedroom worked enough damage to cause Michael to try to make it all go away by setting fire to their elegant apartment. Didn’t work.

The book was launched at a fundraising lunch attended by 120 ‘fans’ and netted $5500 for the Alfred Hospital and then at another lunch where a further $5000 was raised for the Royal Flying Doctors. Something good at least, from a very sad story.

The second book, Jail Birds, was published in May and tells the stories of five women who served time for committing crimes either against or on behalf of someone they loved. Some claimed innocence and some confessed, but even if you think you know the stories behind these crimes from media stories, think again.

Robin in her usual way, winkles out information that has never been shared before and with the protagonists’ permission, shares the stories behind the news with her loyal readers. The most puzzling is the story of Sue Neill-Fraser, a slightly built woman, who is accused of whacking her partner of 16 years over the head with a big spanner on their luxury yacht in the dead of night, while the boat was at anchor at Hobart’s Sandy Bay Yacht Club, winching him up through the sail loft, strapping him to a fire extinguisher and lowering him into a bobbing rubber ducky in the teeth of a south-westerly, motoring out into the Derwent estuary, tipping him overboard, going back to clean up the blood and open the seacocks to sink her beloved boat, then by 3am going home to bed.

Why she didn’t wait till they were out sailing together on a nice sunny day, sneak up with that spanner (which has never been produced!), push him overboard, wait for him to sink and ring to report ‘Man Overboard’ was not explored by the prosecutor. You may have read a large story in the Weekend Magazine (Fairfax Media) on 7 May, which, if you read Robin’s book, you will see follows her story closely, with barely an acknowledgement. Sue Neill-Fraser is doing 23 years.

The third book, currently in editing phase, and which is planned for an October release, is called Fallen Angel and is the story of the beautiful Phoebe Handsjuk, who allegedly threw herself 12 floors to her death down a rubbish chute in a luxury St Kilda Road apartment building where she was living with the son of a prominent Melbourne judge, whose wife is a currently serving County Court judge (stepmother to the boyfriend). We have a plethora of interesting deaths in Melbourne! Watch this space!