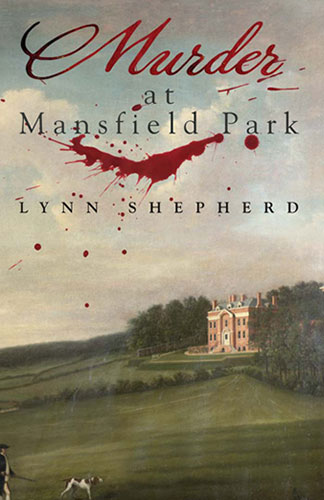 Formerly Austen’s meekest heroine, Fanny Price has become not only an heiress to an extensive fortune but also a heartless, scheming minx. Hiding her true character behind a demure facade, Fanny is indeed betrothed to Edmund, now Mrs Norris’s stepson; but do the couple really love each other? Henry and Mary Crawford arrive in the country ready to wreak havoc with their fast city ways, but this time Henry Crawford is troubled by a suspicious past while his sister, Mary, steps forward in the best Austen style to become an unexpected heroine.

Meanwhile, tragedy strikes the safe and solid grand house as it becomes the scene of violence. Every member of the family falls under suspicion and the race begins to halt a ruthless murderer.

I have found that referencing a classic hardly ever works – more so if the original author is a favourite of the reader. So I came to this book in some trepidation. I was, however, pleasantly surprised. Lynn Shepherd has managed to retain the true Austen flavour even when adding a murder to the mix.
I think it important to state up front that Fanny Price has always been my least favourite Austen character. On finishing this book, I went back and reread Mansfield Park and again found myself wanting to give Fanny a good shake. She is bland and insipid and just too good to be true.
Many of the characters of the original novel appear in Murder at Mansfield Park. The major difference is that Fanny Price is now an heiress, far wealthier than her cousins, Maria and Julie Bertram, and Edmund has become the stepson of Aunt Norris who is now Fanny’s biggest fan and supporter.
The story takes place mainly at Mansfield Park, where Fanny Price has come to live with her Aunt and Uncle, Sir Thomas and Lady Bertram. Both her parents died when she was very young, and her grandparents followed when she was about 12 years of age.
The arrival of Fanny, outwardly demure, but actually manipulative and scheming, makes life less than pleasant at Mansfield Park and as she grows up, things become worse. Several years pass and Fanny becomes betrothed to Edmund. Then Sir Thomas travels overseas to tend to business and, while he is away for many months, Henry and Mary Crawford arrive from the city and join the Mansfield Park group. Much Austen-type fun is had until murder strikes. Since every member of the family may have had reason and opportunity to commit the dastardly deed, the race is on to find the murderer.
The enjoyment from this book comes largely from knowledge of the original or at least of Jane Austen’s writing – her wit and the times in which her stories are set. As such, the reader should not expect blood and guts or complex plotting. On the other hand, it is fun, especially, as noted, for Austen fans.