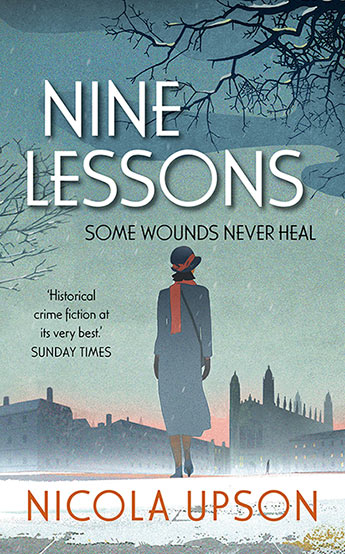 This is the seventh book in Nicola Upson’s Josephine Tey mystery series but the first one I have read rather than listed to as an audiobook. This time around our heroine finds herself in Cambridge during a period when a serial rapist is stalking local women. The year is 1937 so Britons are coping with the end of one war and the rumblings of the next. Josephine’s friend, Detective Chief Inspector Archie Penrose, is one of the returned servicemen, now back on the force and tackling a truly gruesome set of murders with an apparent connection to a choir and King’s College Chapel. Weaved into these two plots is a very personal dilemma haunting Archie, one that has the potential to end his complicated friendship with Josephine once and for all.

Josephine Tey was a real person, a fact that originally attracted me to these books. Tey was the pseudonym of Elizabeth MacKintosh a Scottish novelist writing in the 1930s to 50s who also toiled as a dramatist under the name Gordon Daviot.

In the right mood, I am a sucker for good, distinctly British, historical crime fiction and the handful of works I’ve already read by Upson have always hit the spot. I actually wish I was reviewing one of those previous ones, perhaps the brilliant The Daughter of Time or the entertaining The Angel with Two Faces, because I could be more glowing.

Nine Lessons has all the great Upson trademarks – superb scene and atmosphere-setting that transports the reader to another time and place – but it lost me a little with explicit overlays of modern feminist thinking and behaviours. They took me out of the story at times.

That said, the crime element of the book is ingenious, blending historical facts or events with Upson’s distinctive talent for cooking up complicated and highly original backstories, characters and misdeeds. She presents fascinating and evocative historical details with the lightest of touches. Hence, we trot around Cambridge during these inter-war years, feeling the cobblestones under our feet and peeping into the world of dons, choristers and others.

The famed English ghost-story writer, MR James, was indeed Provost of King’s College and used to entertain and unnerve colleagues and students with late night storytelling sessions. The effect these had on a certain group of students plays a role in a macabre series of murders at the heart of Nine Lessons. This is what I mean about Upson being ingenious – how great an idea is that?

In an interview with www.metro.news[1] we learn how the author came upon this idea: “In December 1913 James failed to finish a new story. I found myself inventing reasons for this that were more sinister than pressures of time or college business. What if something terrible happened that Christmas? What if, 25 years later, those men who gathered to be entertained start dying, killed off in ways that echo James’s stories?”

Her imagination didn’t stop there though. The secondary story line, dealing with a serial rapist, was inspired by Peter Cook who terrorised Cambridge’s female student population in the 1970s. Upson replaces Cook’s student victims with nurses and shopworkers to better suit the era she is writing about.

This storyline gives Josephine Tey the chance to become involved with one of the rape survivors and allows her character to meditate on the terror the young woman experienced along with the sad aftermath the attack has on her life and budding career. Upson also gets to explore some of the victim’s thought patterns, expressing ideas that, regrettably, would still be prevalent today.

As the rapist finishes his gruesome business with one young woman her thoughts are explored. Has she met him somewhere before, perhaps nursed him? Was she too friendly, therefore encouraging him? Was she too aloof, therefore provoking him? Depressing stuff.

The rapist subplot also allows Detective Archie Penrose to come across as much more enlightened than his colleagues. At one point, he marvels that a policeman would criticise rape victims for not paying more attention to their assailant during the actual attack, making them more useful witnesses down the track.  One hopes there were such sensitive souls on the police force back then but were there?

Upson is capable of serving up wonderful visual detail – the inside of a chapel on a bright autumn day is described as “a feast of glass and colour which shone with a luminous intensity” – while still cracking along with the story. Indeed, her knack in producing distinct characters and compelling settings makes me wonder when the Josephine Tey books will morph into a television series. They offer an appeal akin to the Kerry Greenwood/Phryne Fisher detective series but inhabit a broader geographical and social canvas. They also offer a few unexpected touches such as Josephine being a lesbian, a plot jump that obviously occurred in one of the novels I’ve missed. She is in 1937 Cambridge to help her partner, Marta, set up the new home.

Three key storylines run through Nine Lessons. One deals with the murders that the detective is investigating, one is about a serial rapist on the rampage and one is about Detective Penrose’s troubled romantic relationship and a child he never knew of. For me the third strand was the least interesting and the one that threw up modern attitudes and reactions that did not ring true for the times but I could be wrong. All of them, ultimately, deal with how the actions of the past can dramatically and in some cases cruelly set off tragic consequences in the years that follow.