Nordic Noir gets a red-hot reception 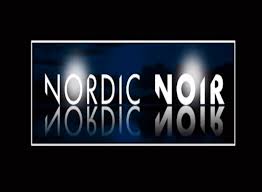 A huge crowd packed the Rising Sun Hotel on 30 June for Sisters in Crime’s Nordic Noir event which was totally booked out.

It seems that we just can’t get enough of authors such as Anne Holt, Yrsa Sigurdardottir, Mari Jungstedt, Karin Alvtegen, Camilla Läckberg, Åsa Larsson, Liza Marklund, Agnes Ravatn, Kati Hiekkapelto, and Karin Fossum and shows such as The Bridge, The Killing, The Midnight Sun, Blue Eyes and Spring Tide. SBS On Demand has at least 10 Nordic Noir series to meet our growing appetite for things Scandi. 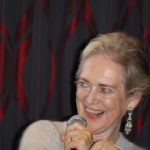 Compere for the night was Professor Turnbull, who co-authored the Nordic Noir entry for the Oxford Research Encyclopaedia of Criminology and Criminal Justice. Sue said a key question was whether Nordic Noir was a brand or is it a genre.

“Whatever it is, Nordic Noir in crime fiction and on screen has captured the attention of readers and viewers worldwide. But is it the landscape, the interior design, the strong female characters, the social concerns and the sheer power of the story-telling that keeps us coming back?

“Nordic Noir has also had a powerful influence on crime fiction and crime on screen globally, inspiring a raft of Nordic Noir inflected story-telling. From the Welsh series Hinterland (Y Gwyll) to The Kettering Incident in Australia and Witnesses (Les Temoins) in France,” she said. 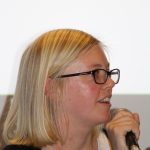 According to Hanna Lofgren, who translated Savage Congress by debut Swedish author Anna Karolina for Echo Publishing last year, the appeal is of Nordic Noir is not hard to fathom:

“Plots and landscapes alike are cold, bleak, and sinister. They are often police procedurals with lead detectives struggling with complex, difficult and intriguing personal lives. Nordic Noir is also regularly infused with social commentary and critique which makes it all the more interesting. For me, there is nothing better than curling up in the winter with a glass of red wine and a good Scandinavian crime novel or TV drama.”

Much to her surprise. Hanna was asked to sign copies of Savage Congress for four fans at the event. Thanks to the coverage the event received, ANU contacted Sisters in Crime to invite Hanna to participate in a Nordic Noir panel for the Scandinavian Film Festival in Sydney. 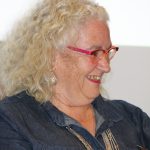 Author and Sisters in Crime national co-convenor, Janice Simpson, says, “Every time I snuggle down with a good book or a TV drama series from the far northern climes, I expect to be transported to a land of snow, fire and ice.

“However, having travelled to Iceland in June, I discovered a land that was not dark or icy or snowy, indeed a land where no volcanoes were currently erupting. Instead I found a land of birds and water and softly spoken men telling me stories from the sagas. Oh, I want to read that in my Nordic Noir next time.” 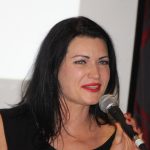 Leigh Redhead, author and Australia’s ‘Queen of Noir’, took a contrary view to the other panellists. “I enjoy reading Nordic Noir, but don’t think most of it is actually noir in the way I understand the term. I agree with Paul Duncan who argues that ‘Noir is about the weak-minded, the losers, the bottom-feeders, the obsessives, the compulsives and the psychopaths’. (And that’s just the protagonists!)

“While the books often feature an investigator with a dark past who doesn’t play by the rules, and involve a corrupt society, brutal murder, sex, violence and social and political critique, they tend to conclude with good triumphing over evil. Nordic Hardboiled doesn’t have quite the same ring to it though, does it?”

Just an hour after the event finished, Radio National treated us to the BBC World Service Arts Hour broadcasting from Iceland. The program featured queen of Nordic crime writing Yrsa Sigurðardóttir (who, we’d just been discussing), Ólafur Darri Ólafsson, actor and star of the wonderful Icelandic drama Trapped (still available on SBS On Demand) and the pioneering rap collective, The Daughters of Reykjavik, plus a terrific comedian: Click here to listen online.

On 14 July, Danish actor and director, Charlotte Sieling, who was in Australia for the Scandinavian Film Festival, was interviewed for ABC Radio Melbourne by Jane Clifton (Sisters in Crime member) and Jon Faine for the Conversation Hour. Click here to listen online.