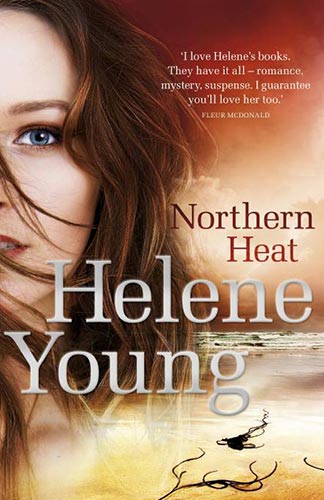 Author: Helene Young
Publisher: Penguin Random House Australia
Review By: Sandy Curtis
Book Synopsis: Northern Heat builds suspense the way the cyclone that threatens Cooktown makes its presence felt – slowly at first, then with tendrils of heat and tension that swirl around the characters, drawing the reader into a world of lies, violence and murder.

Conor Woods has been working on a trawler and also as a coach in Cooktown’s youth centre, trying to rebuild his life after his wife and daughter were murdered several years before. He is attracted to Dr Kristy Dark, the local GP, and finds coaching her thirteen-year-old daughter, Abby, gives him the opportunity to flirt with her.

Kristy has come to Cooktown to be closer to her parents who own a cattle property a few hours’ drive away. She is trying to come to terms with the loss of her son and husband, and deal with the secrets and guilt arising from their deaths. She fights her attraction to Conor, but it’s a losing battle as he reveals qualities that make him hard to resist.

When, on his early morning run, Conor finds a murdered man, he becomes a police suspect. His shadowy past further complicates his claim of innocence, but he finds support from Kristy and other townsfolk. Domestic violence in its differing forms plays a large part in Northern Heat, and is threaded through the lives of several characters, especially Freya and her daughter who live in fear of Freya’s violent husband and his dominating mother.

The evil that lurks in the isolated town starts to creep into the lives of Conor, Kristy and Abby and their friends, revealing secrets people would rather keep hidden. As the cyclone approaches, Abby makes a decision that forces Conor and Kristy to confront the killer Conor had been searching for.

The author depicts life in the small coastal town with a deftness that shows an intimate knowledge of the area, and her descriptions of the cattle property ring with authenticity. The cyclone becomes almost another character as its menace descends on the town, and it adds to the tension of the story’s climax.

Readers of Helene Young’s books will know that Conor first appears in Young’s previous book, Safe Harbour, but it’s not necessary to have read that in order to enjoy this story.