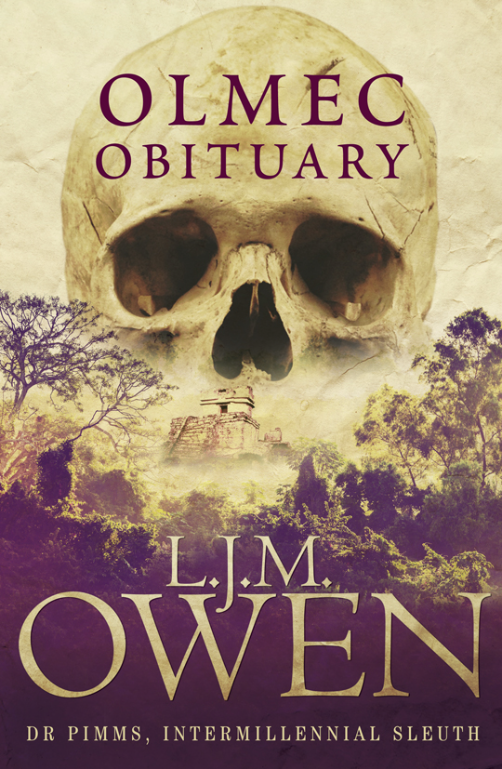 Yearning for her former life as an archaeologist, Australian librarian Dr Elizabeth Pimms is struggling with a job she doesn’t want and a family she both loves and resents. A royal Olmec cemetery is discovered deep in the Mexican jungle, containing the earliest writing in all the Americas. Dr Pimms is elated to join the team investigating the ancient skeletons found on site. Triumph is short-lived, however, as Elizabeth’s position is threatened by a volatile excavation leader, contradictory evidence, and hostile colleagues. With everything working against her, will Dr Pimms find the cause of death for a 3,000-year-old athlete and those buried with her?

The intermillenial sleuth, young archaeologist Dr Elizabeth Pimms, is an interesting addition to the fictional field of amateur crime solvers and her expertise reflects that of the author who is also a trained archaeologist and qualified librarian. Potential readers should not be deterred by the archaeological research in the book because it is presented in an interesting and accessible way. The novel is well-written and the story is engaging, involving as it does both an ancient and a contemporary mystery, as well as Elizabeth’s unusual family members and her relationship with them.

The family needs her back in Australia to provide financial support and this means she has to leave the archaeological dig in Egypt where she wants to be. This is the cause of some tensions within the family despite their mutual affection, compounded by Elizabeth’s incorrect assumptions about her mother’s death years earlier. Further problems arise for Elizabeth when she has the chance to work as a volunteer on the ancient skeletons from an important site sent to Australia for investigation.

The leader of the investigation seems to be pushing the findings in a direction not supported by the evidence Elizabeth identifies. The ancient mystery as to how these people died presents Elizabeth with a challenge in itself, quite apart from her difficulties with the team leader. Elizabeth herself, with her failures and successes is a convincing character and most of the other characters are also well-drawn, with the possible exception of Elizabeth’s absent boyfriend Luke. She is supposed to be very committed to him but it is hard to see why when we do not get much of an idea of what he is like.

There are a couple of loose ends unresolved, including why one of her colleagues at the library is hostile, and there is perhaps a bit too much going on in Elizabeth’s life at home, at work and in her head. But these are relatively minor quibbles about a first time author with an interesting new approach. More books in the series are apparently planned.