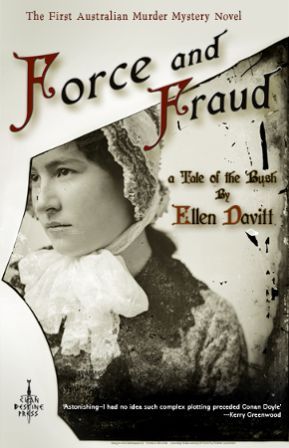 Outback Australia in the mid-1800s

When rich, domineering squatter Angus McAlpin is murdered, the obvious suspect is the penniless artist, Herbert Lindsey – who wants to marry his daughter, Flora.

McAlpin may have proclaimed that Flora would marry Herbert ‘only over his dead body’ – and Herbert’s bloodstained knife and handkerchief were found near the murder scene – but the artist denies any wrongdoing.

So begins a compelling murder mystery and trial, as the heiress seeks to prove her lover’s innocence, and a country town takes sides.

Force may have killed Angus McAlpin, but fraud follows murder in a cunning plan to see Herbert Lindsey hanged – by any means necessary.

For someone else is determined to marry Flora, to obtain her property and her person; and he will stop at nothing.

First published in Melbourne in 1865 – in the midst of the often-lawless gold rush era of Australia’s colonial past – it is a genuinely original novel; well ahead of its time.

In fact Kerry Greenwood – the creator of Phryne Fisher – describes Ellen Davitt’s novel as: ‘a stunning mystery with a court scene worthy of Perry Mason’.

The Clan Destine Press eBook of Force and Fraud features an introduction by writer, Sister in Crime and ‘literary archaeologist’ Dr Lucy Sussex.

It also contains a short story by Ellen Davitt, first published in The Australian Journal in August 1867.

“The Highlander’s Revenge” is a crime story, rather than a mystery; and was the best of Ellen Davitt’s short stories and a significant early fictionalisation of European atrocities against Aborigines.

“The Highlander’s Revenge” comprises two stories: a memoir of genocide; and the reaction to it from an audience.

The CDP eBook of Force and Fraud will be available in time for the 2015 Davitt Awards for Australian women’s crime writing on August 29.