Out of the Ice – Ann Turner 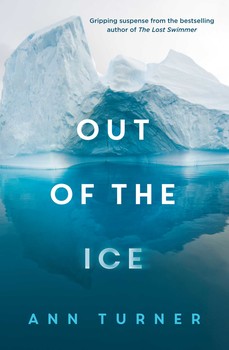 When environmental scientist Laura Alvarado is sent to a remote Antarctic island to report on an abandoned whaling station, she begins to uncover more than she could ever imagine.

Reminders of the bloody, violent past are everywhere, and Laura is disturbed by evidence of recent human interference. Rules have been broken, and the protected wildlife is behaving strangely.

On a diving expedition, Laura emerges into an ice cave where she is shocked to see an anguished figure, crying for help. But in this freezing, lonely landscape there are ghosts everywhere, and Laura wonders if her own eyes can be trusted. Has she been in the ice too long?

Back at base, Laura’s questions about the whaling station go unanswered, blocked by scientists unused to outsiders. And Laura just can’t shake what happened in the cave.

Piecing together a past and present of cruelty and vulnerability that can be traced around the world, from Norway, to Nantucket, Europe and Antarctica, Laura will stop at nothing to unearth the truth. As she comes face to face with the dark side of human progress, she also discovers a legacy of love, hope and the meaning of family. If only Laura can find her way . . . Out of the Ice.

Friends in America are going to Antarctica.  I can’t see it; going to a continent that has subzero temperatures for most of the year, just doesn’t appeal.  I suppose the only thing originally drawing me to this book was the low temperatures we were having in Victoria this winter.  I reckoned I could somewhat relate, and snuggled into the donah with my Nokero eco-solar light, feeling my nose getting colder as I travelled with Ann Turner’s main character, Laura Alvarado, into her world of ice and snow and cold, penguins, seals and whales.

What really surprised me was that Turner painted the base surrounds where Laura, a doctor in marine biology, was stationed, with such realism.  It’s like she’s been there.  Turner, also a script writer and director, gave an interview to Readings Carlton saying that she enjoyed the process of totally getting into the environment without worrying about budget or background shots.  I’ve seen this book reviewed as ‘cinematic’, and well it might be since Turner did an excellent job of, as she describes, ‘visualizations’, depicting the pristine wilderness and animals and the rough conditions of professionals living in that situation.

Main character Laura’s background and training is explained in the first 15 pages. This sets you up for her surprising diving experience (I can only say brrrr) when she comes across a child crying for help in an ice cave and her subsequent single-minded focus on finding out what this ‘apparition’ really is.

If Turner hasn’t been to Antarctica, she’s done an amazing job of research, not only into the landscape and animal life, but also the environmental impact civilization has on these areas.  Then she sends Laura off to Nantucket and Venice, just for a change of scene.  And it all fits nicely into the story.  And, just for those who like a little romance mixed into the tale, there’s that too; but it doesn’t take front and centre.

So for someone who’s put off by subzero temperatures, I greatly enjoyed Turner’s book and her amazing ability to take me to Antarctica for an interesting mysterious adventure that kept the pace going and the pages turning.