Outside The Law 3 by Lindy Cameron 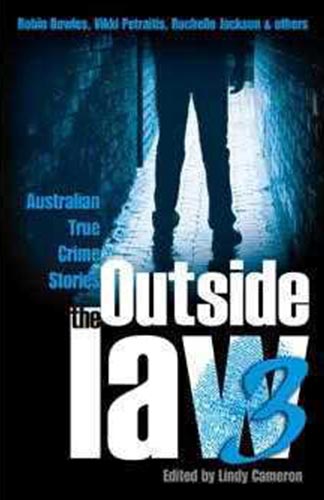 Author: Lindy Cameron, Editor
Publisher: Five Mile Press
Copyright Year: 2009
Review By: Phyllis King
Book Synopsis: Outside the Law 3 brings together another collection of true crime stories which, this time, as Lindy Cameron explains in her introduction, largely fall into two categories: “the appalling abuse or tragic loss of children; and the life and times of Australia’s big- and small-time crooks, the cops who tracked them down, and the journos who told us all about them at the time.”

The tales which fall into the first category make difficult reading; those in the second give us a fascinating insight into the world of lawyers, police, courtrooms and crime reporters.

‘Remembering Things Past’ by Vikki Petraitis is very uncomfortable. One is left with mixed feelings: horror and disgust at the perpetration of such acts; sympathy and admiration that someone can face their own demons so that the same fate may not befall others. Rod Braybon suffered appalling abuse in the 1950s at the Bayswater Boys Home. He was, unfortunately, only one of hundreds of thousands who had their childhood stolen in this way. In her introduction, Lindy Cameron asks why we want to read such stories and why victims want to tell them. I don’t think we do want to read them – but we must. I don’t suppose he does want to tell it – but he must. Evil such as this must be known so that everything can be done to ensure it never happens again.

For me, the most moving story was Renée Otman’s ‘Cold Blood’. How can anyone plan and carry out the murder of a six-month-old baby? Here is evil beyond belief. The story is particularly moving because Otmar is the aunt of baby Jordan. She tells of her return from Australia to Cape Town after ten years for such an horrific reason, through the drawn-out trial of the perpetrators, to the final heart-rending words from Jordan’s mother after the verdict: “I kept standing there and thinking that it’s all over, but still she is not coming back. I thought that perhaps if I stood there long enough she would come back. But she won’t.”

Robin Bowles outlines the amazing work done by police across the world, and a computer forensic examiner in the USA in particular, in ‘Rescuing Tara’ whose prolonged abuse was chronicled on the internet through pornographic sites.

Interspersed with these harrowing tales, there are stories on CSI – the difference between real life and television; the ‘considerate robbers’ of the Great Bookie Robbery; how a high-profile murder trial is very like the opening night of a new play or opera; and the days of learning the craft of journalism on the job.

Jacqui Horwood takes us on an exciting ride with Task Force Zebra, formed in 1982, which used entrepreneurial investigative techniques which became the investigations model still used today; and we learn about Griffith, the MacKay, murder, Al Grassby, defamation libel and the Mafia in ‘Spreading the Mafia Stain.”

John Allin, as a young journalist, thought he believed that stories shouldn’t be allowed to get under your skin – that journalism was just a job after all. His story of Kirste, a beautiful little girl abducted in South Australia, broke that golden rule. She did get under his skin and, more than that, he was inspired by her parents who, when he revisited them 32 years later, still did not know what had happened to their daughter. But their story was not one of revenge or bitterness. Rather it was one of love and courage and is another very moving account.

So, when you pick up this book, expect to read of evil. But expect also to read of men and women who are working to combat that evil and, from time-to-time, succeeding. Expect to be moved to tears of sadness. But also expect tears of admiration.