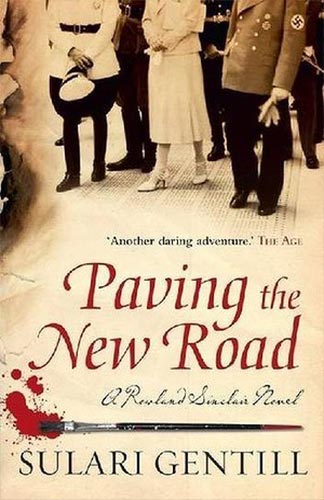 Author: Sulari Gentill
Publisher: Pantera Press
Copyright Year: 2012
ISBN: 9781921997075
Review By: Angela Savage
Book Synopsis: The year is 1933 and Hitler’s Nazi government is consolidating its hold on power, imprisoning socialists, trade unionists and avante garde artists who work is considered ‘degenerate’. Public book burnings are held to purge the shelves of ‘un-German’ works by Marxists, pacifists, Jews and other progressive intellectuals. Handshaking is banned and German officials required by law to greet each other with a raised right hand.

Eric Campbell, leader of Australia’s über-conservative New Guard, has chosen this moment to go on tour in Italy, Germany and Poland with a view to importing European fascism to Australia.
Meanwhile, the conservative but respectable Old Guard has a man in Campbell’s party called Blanshard who together with a second man, Bothwell, based in Munich, is charged with derailing Campbell’s plans. When Bothwell drowns, the Old Guard — though disapproving of his bohemian lifestyle — ask Rowland to take Bothwell’s place, because he speaks German like a native and ‘the Sinclairs have always been true to King and Country’.

In what would be a stretch for anyone else, Rowland secures Senator Hardy’s agreement for his entourage of Edna, Milton and Clyde to travel with him to Munich where they are to pose as art dealers, make contact with Blanshard, and help sabotage Campbell’s objectives.

But in the politically volatile environment of Munich, it’s hard to tell friend from foe. And for Roland and his friends, to misplace trust could prove fatal.

It’s a risky gambit, sending a bon vivant like Rowland Sinclair and his bohemian band to Munich in 1933. But it’s precisely the contrast between their erstwhile carefree way of life and what they experience in Germany that makes it work. Gentill captures their personal anguish as avante garde artists, writers, Communists and in Milton’s case a Jew in response to the Nazis’ persecution of all they hold dear and arguably have taken for granted up to now.

The flippancy in the characters that I sometimes found annoying in the earlier novels disappears in Paving the New Road. And though I wouldn’t wish the terrible things that happen to Rowland on anyone, I welcome the transformation of the ‘determinedly disinterested’ gentleman artist into someone with an active interest in international politics.

As with previous novels in the series, Gentill’s fictional characters rub shoulders with historical figures, and while I found this distracting at times, I also appreciated the insights this provided: I didn’t know, for example, that Hermann Göring had a younger brother who remained a committed anti-Nazi.

Besides, Rowland’s encounter with W Sommerset Maugham during a layover at Raffles Hotel in Singapore delivers one of my favourite exchanges in the novel:

“This sort of [espionage] work is best done by gentlemen.”
“Because spying ought to be done politely?” Rowland ventured, amused.
“Because it ought to be done dispassionately… and there is nothing as devoid of passion as the English gentleman.”
Gentill has been described as “amazingly prolific”, this fourth novel in the Rowland Sinclair series released within two years of the first. In a post on the Murderati blog, David Corbett suggests, ‘Writers who do work at the faster clip are often known more for their entire output than a single book’ and cites Dennis Lehane’s reason for wrapping up his own series as, “Have you every heard anyone say ‘The seventeenth book in the series was my favorite’?”

Whether Gentill becomes known more for her entire output than a single book remains to be seen. But I wouldn’t put it past (full disclosure alert) my friend Sulari if the seventeenth book turns out to be my favourite. For now, Paving the New Road earns that guernsey.