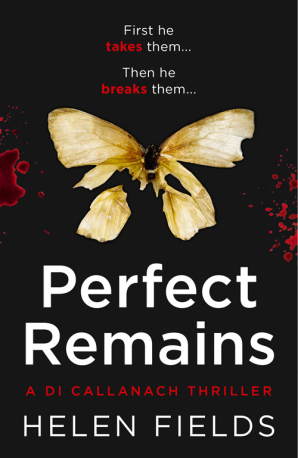 On a remote Highland mountain, the body of Elaine Buxton is burning. All that will be left to identify the respected lawyer are her teeth and a fragment of clothing.

In the concealed back room of a house in Edinburgh, the real Elaine Buxton screams into the darkness

Detective Inspector Luc Callanach has barely set foot in his new office when Elaine’s missing persons case is escalated to a murder investigation. Having left behind a promising career at Interpol, he’s eager to prove himself to his new team. But Edinburgh, he discovers, is a long way from Lyon, and Elaine’s killer has covered his tracks with meticulous care.

It’s not long before another successful woman is abducted from her doorstep, and Callanach finds himself in a race against the clock. Or so he believes The real fate of the women will prove more twisted than he could have ever imagined.

The book opens with one scene that introduces a meticulous murderer, and another scene that introduces a Detective Inspector recently transferred from Interpol to the Scottish Police force. The story line is paced so that more is revealed about the past of both characters through the book. We know the identity of the murderer early in the book, although the police do not.

Part of the story is a psychological study of the murderer; as throughout the book more is revealed about his past, his careful disposal of bodies and his recent actions.

The DI is forced to work alongside a profiler. This creates difficulties when the pair draw very different conclusions.

Another case is introduced, which is more of a whodunit situation, but I found I was annoyed by its presence. It seemed to have little relevance to the building of the story. However it allowed the development of a supportive relationship between the DI and one colleague to be developed.

The three main characters were developed well. The murderer was so well drawn in his split life, that I was itching to be able to get him to stop being so annoying, and to get him to wake up to himself.

As the body count increases and the past mixes with the present the story moves to the climax. There is more to the murders than meets the eye, and there is a race against time to prevent more murders. Finally the police identify the murderer and the conclusion draws all the story’s threads together.

I enjoyed the book, and will look forward to reading more of Helen’s writing and to seeing how the DI settles further into life in Scotland.