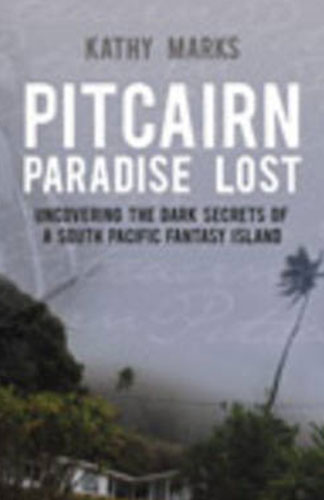 Author: Kathy Marks
Publisher: Fourth Estate
Copyright Year: 2008
Reviewed By: Phylls King
Book Synopsis:
Kathy Marks has written a thoughtful and intense book about Pitcairn Island where the survivors of the Mutiny on the Bounty settled some two centuries ago. Pitcairn is roughly 5 km square with approximately 50 inhabitants who largely belong to four families descended from the original settlers.

Part 1 covers the allegations of sexual assault of under-age girls, the charging and trials of a large number of the Island males.

Marks was Asia-Pacific correspondent for the British national newspaper The Independent, when the story of the horrendous abuse on Pitcairn Island surfaced. At the British Government’s instigation, the trials were held on Pitcairn and Marks was one of only six journalists accredited to live there, covering the trials and Island life.

The book is well written with a great sense of place. Marks brings to life the isolation and the beauty of this island which is hundreds of miles from its nearest neighbour. Her frustration in coming to terms with the Pitcairn culture is evident. The fact that the accused could be cousins, uncles, brothers-in-laws and family friends of the victims was deeply distressing to all concerned. On the island, the ‘victims’ were considered to be the accused men, not the girls against whom the crimes were committed. One critical witness withdrew her statement under pressure from her Pitcairn family saying “I … never at any time would be willing to go to court or want to prosecute anyone on Pitcairn … I only wanted the Pitcairn men to learn how to treat girls”.

Having lived on the island for six weeks and following the trial intimately while living daily within the tiny community, itself suffering perhaps irreparable splits, Kathy returns to Sydney to find there is not the horror reaction she is expecting. Rather, excuses are made – confined island; standard Polynesian practices. But largely to blame, she feels, is the “myth” of the Bounty and the courageous fight of a few ordinary sailors against a cruel despot.

Thus, the second part of the book explores the Bligh/Christian encounter and the way the myth has become fact both on the island and far beyond it. It also explores the “South Pacific culture/under age sex” argument.

The facts were that the island was not Paradise Lost. The British Government knew they were there, provided the infrastructure for them to live but left them to their own devices. For example, in 1949, a school had been set up by the British Government and teacher after teacher reported the extremely high incidence of schoolgirl pregnancies and the “interference with children by grown men.” Yet all were ignored. Marks makes a strong case that children were let down, not only by their own families, but also by outsiders in the community. They knew, or at least strongly suspected, what was going on.

She claims that many outsiders fall under Pitcairn’s spell – suspending critical judgment and losing touch with conventional values. And the infatuation of the island continues after they leave. While Marks herself did not suffer from that infatuation, she did become fascinated by this quite amazing island, living partly in the past and yet having satellite and email access to the present.

It is a gripping read, chilling in the denials of some who remain on the Island, and awe-inspiring in the courage of the girls who came forward, risking and often losing their families.

The one disappointment is the Family Tree and Cast of Characters which appears at the back of the book, Since I don’t always read the Contents Page before diving into a book, I didn’t discover this helpful information until I was half-way through.