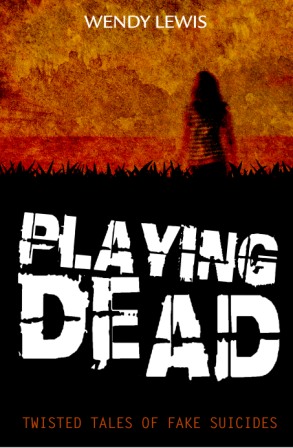 Author: Wendy Lewis
Publisher: Five Mile Press
Copyright Year: 2013
ISBN: 978-1-74346-301-7
Review By: Susan Woldenberg Butler
Book Synopsis:
Pretending to be dead is one of the more bizarre ways to opt out of society. Despite the obvious risks, a surprising number of people attempt to leave their old life behind by faking suicide. And the results can be unbelievably madcap.

High fliers facing financial ruin, murderers on the run, greedy couples with a taste for insurance fraud…you’ll find them all here in this entertaining collection of real life stories of outrageous individuals who have tried – and failed – to stage their own death.

Some time back I was driving down the street, listening to a Philip Adams radio segment about people who fake their own deaths. It was intriguing. I wanted to know more. Why would people choose to disappear from their lives? Now, thanks to Playing Dead, True Tales of Fake Suicides I do.

The book covers 20th and 21st century dropouts, mostly in Australia, the US and the UK with one each in Japan and Austria. The cast of characters ranges from a world-renowned to a labourer, with conmen and fraudsters prevailing. Motivations include greed, crime and avoidance of financial ruin. Meet a stunt pilot who could never get enough toys before he snapped, a man from Hong Kong who tried to use 9/11 to obtain a false passport and a greedy psychologist who alienated his sons and was brought down by his energetic stepmother; and various slick operators, smooth-talking Irishmen who preyed on lonely women and women who stood by their man (except the one who decided to spend the money she was supposed to send to her husband).

Interestingly, aside from being accomplices to their loved men, pseudocide is overwhelmingly a male activity. Lewis recounts the story of only one woman. Perhaps women who commit pseudocide cover their tracks better and get away with it, and we simply don’t hear about them.

Lewis talks about the distress of those left behind, something pseudocides don’t often consider. She fleshes out the question, what sort of people fake their own deaths? The book’s judgemental and humorous bordering on flippant style took some getting used to. Lewis doesn’t pretend to be objective, which is somehow trustworthy. She jumps right in, for example: ‘What they did was insensitive, irresponsible and exceptionally stupid’ (p 225).

Playing Dead,True Tales of Fake Suicides is a great read, with lots of short chapters, variety and an unusual cast of characters. It’s good for airports, waiting rooms and those times you want to dip into a good book but haven’t as much time as you would wish. My only quibbles concern the publishing. What sort of editing was offered to the writer? for example, in addition to copy-editing errors (which every writer knows it’s impossible to avoid), a statement about the Los Angeles harbour was at the very least misleading. Sydney has a harbour; Los Angeles has many, and anyway the term would never be used. The choice of cover was problematic. While worthy it is wrong for the book. It doesn’t capture the tone and is boring. What a missed opportunity to do something delightfully visual and irreverent.

I recommend this book to anyone interested in a side of human nature rarely glimpsed. Lewis has shone a light in a murky, fascinating corner of human motivation. I wish the book had been twice as long.