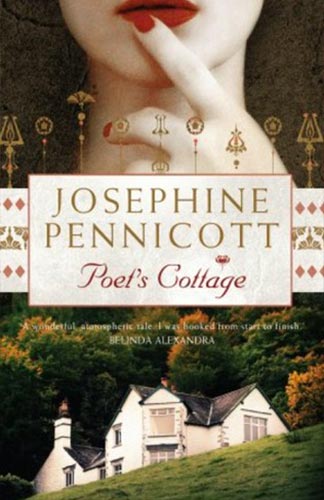 Set in the small, fictional town of Pencubbit in Tasmania, POET’S COTTAGE is really a story about generational memory. Sadie, and her teenage daughter move to Poet’s Cottage after Sadie’s mother Marguerite dies. The house, childhood home to Marguerite and her older sister Thomasina, and their parents Pearl and Maxwell is also the place where Pearl was brutally murdered. Pearl was a children’s writer, an eccentric and erratic woman, capable of profoundly shocking behaviour particularly in that time and that place, remembered very differently by her two daughters – Marguerite with affection, Thomasina with loathing.

Sadie returns to her mother’s childhood home to write a book about her grandmother, to uncover the truth of her death, to recover from her own divorce and grief at the death of her mother. Along the way she finds why Thomasina loathed the mother that Marguerite loved, and why the locals were so shocked and scandalised by Pearl.

The book moves backwards and forwards between the time of Pearl’s life and her antics and the current day. The conduit for much of this movement is Birdie Pinkerton. Childhood friend and then long-time lover of Maxwell after Pearl’s death, Birdie is still alive, albeit nearly 100. Her connection is multi-part. She was part of Pearl and Maxwell’s circle during the time that they lived in Poet’s Cottage, part of Maxwell’s life post Pearl and the writer of an earlier book about Pearl that was part of what set Sadie on her path. She still lives in Pencubbit and has a connection with the town, the architecture and the people that is informed by her interest as a historian, and also because she has been there for such a significant period of time.

I understand that part of the plot line of POET’S COTTAGE was inspired by the story of children’s author Enid Blyton, whose own daughters have conflicting opinions on Blyton as a mother. Whilst that might be an inspiration, the process of revealing the reason for the differences is interesting in this book, and Thomasina, who still lives in the vicinity, is a complex portrayal both in childhood and as an adult. In fact there are a lot of vaguely unpleasant characters littered throughout the book – some of whom go onto be revealed as maybe just a little misunderstood, some of whom remain unrepentant.

POET’S COTTAGE was a most unexpected reading experience, and one of the problems with writing a review of a book like this is avoiding revealing much of the detail – as this is a very detailed, complicated but extremely readable story. It is really less about solving any mystery around who murdered Pearl, although that is eventually revealed, but more about 4 generations of women in the family, and the women and to a lesser extent, the men, around them. The concentration is very much on the worlds that those women inhabit. Influenced by war, judged by society norms within all the generations, tempered by the isolation and tightness of a small community, connected to each other via flawed and accurate family recollection, POET’S COTTAGE uses a lot of threads to build a beautifully woven story.