It must have been something in the ether. Two of the winning books in Sisters in Crime’s 20th Davitt Awards officially awarded tonight (26 September) concern pandemics – Meg Mundell’s The Trespassers (University of Queensland Press), the winner of the Davitt (Best Adult Crime Novel) and Susan Hurley’s Eight Lives, (Affirm Press), winner of the Davitt (Best Debut Crime Book). Both were published in 2019. 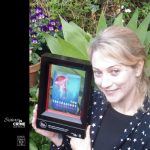 The Trespassers, Mundell’s first foray into crime fiction, is presciently set during a global pandemic, and tracks the deprivations and fears of passengers sailing from London to Melbourne as new infections break out on board.

Mundell, who lives Melbourne said: “One year ago, when The Trespassers was published, I never dreamed that my fictional global pandemic would become reality. Curfews, sick people trapped on ships, conspiracy theories, outsourced quarantine…”. 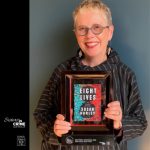 Eight Lives (Affirm Press), Hurley’s debut novel, was inspired by a real-life drug trial that ended tragically. A Melbourne-based medical researcher and writer, Hurley said her book shines a light on the world of medical research and drug development, a world characterised by optimism and life-changing discoveries, but also competitiveness, financial pressures and setbacks.

“The men who volunteered for the drug trial that seeded the idea for my novel suffered a cytokine storm, one of the causes of death from COVID-19… One of the characters even invents a treatment for a pandemic virus – it’s called Pandaid. So, let’s hope that in that regard, fact emulates fiction.” 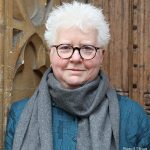 The Davitt Awards were presented by Tartan Noir crime queen Val McDermid, online from Fife in Scotland, and hosted by Sue Turnbull, Sisters in Crime’s ambassador at large (and Senior Professor at the University of Wollongong). Before presenting the awards, McDermid explored her life in crime, and her latest book, Still Life, with Turnbull. Still Life includes mentions of the pandemic and finishes on the eve of the lockdown in the UK. 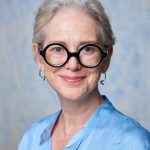 Turnbull also compered the inaugural Davitt Awards in 2001, which were presented at SheKilda, the Sisters in Crime 10th anniversary convention held at St Kilda Town Hall.

“We had hoped to hold a gala dinner to mark this special occasion of the 20th awards, but the pandemic had other ideas. Back in 2001, there were 7 books in contention although the awards didn’t then extend to true crime – or what we’re now calling non-fiction. This year an amazing 124 books have been battling it out. The one silver lining is that, thanks to the miracles of modern technology, Val McDermid could do the honours – without leaving Scotland,” Turnbull said.

It is the third time that McDermid has presented the Davitts and her seventh event with Sisters in Crime.

She declared at the end of the hour-long ceremony: “You are my tribe, you are my tribe… you took me to your heart many years ago, and you’ve kept me in your hearts ever since, and I treasure the time I spend with you, and I hope that I’ll get back to spend some time with you in the flesh next year.”

The other Davitt awards were presented to: 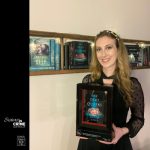 Astrid Scholte (Sandringham, Vic) for her debut novel, Four Dead Queens (Allen & Unwin), for Best Young Adult Crime Novel: “I’ve been a fan of crime stories ever since I was a child, in particular, the whodunnit. In Four Dead Queens, I wanted to create an Agatha Christie-style murder mystery with my take on a Poirot-like investigator, set in a unique fantasy world with many twists and turns.” 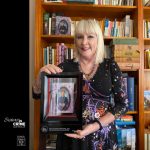 Jenny Blackford (Wallsend, NSW) for her debut book, The Girl in the Mirror (Eagle Books, an imprint of Christmas Press), for Best Children’s Crime Novel. The judges described it as “a refreshingly contemporary time-slip mystery”. She has published three collections of poetry and won two prizes in the Sisters in Crime Australia Scarlet Stiletto awards in 2016 for a murder mystery set in classical Delphi, with water nymphs. 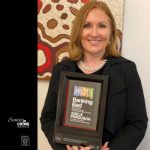 Adele Ferguson (East Brighton, Vic) for her debut crime book, Banking Bad (ABC Books, an imprint of HarperCollins Publishers Australia), for Best Non-Fiction Book. Ferguson is a multi-award-winning journalist for The Age and The Sydney Morning Herald and a regular guest reporter on ABC’s Four Corners and 7:30. She said: “While this book is non-fiction, it often felt like I was writing fiction. A financial system we trusted had for decades been developing unconscionable business practices and committing criminal acts… Some executives behaved like psychopaths, making decisions that destroyed peoples’ lives, in the quest to fill their pockets.… Banking Bad is living proof of that old adage that evil can only prosper when good people fail to act.” 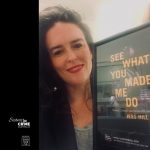 Jess Hill (Bondi, NSW) who was highly commended for See What You Made Me Do: Power, control and domestic abuse (Black Inc.) in the Best Non-Fiction Book According to the judges: “See What You Made Me Do documents and exposes the many guises of the perpetrators of domestic crimes and abuse and at the same time gives strength and power to the stories of the victims involved. This is a remarkable book; an intimate and deep look at the impact of domestic control and abuse – a must-read for every Australian.” It was also awarded the 2020 Stella Prize. 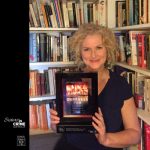 Emma Viskic (Northcote, Vic) for Darkness for Light (Echo Publishing) and Dervla McTiernan (Yokine, WA) for The Scholar (HarperCollins Publishers Australia), joint winners of the Readers’ Choice Award, as judged by the 500+ members of Sisters in Crime. Both are serial offenders when it comes to the Davitt Awards. Viskic has won a total of  five Davitt Awards for the previous two books in her Caleb Zelic series. Viskic said that the support of Sisters in Crime and the Davitt Awards had been instrumental in building her career. “You’ve inspired me to pay it forward, by mentoring women and underrepresented writers.” 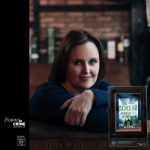 McTiernan won the Davitt (Best Adult Crime Novel) last year for The Rúin, the first in her Cormac Reilly police procedural series set in Galway, Ireland. McTiernan said: “So many of us writing today can point to a moment in our careers where the Sisters in Crime encouraged us with a shortlisting or a win when that kind of encouragement really mattered.”

This is first time in 20 years that the Readers’ Choice Award has been jointly awarded.

To mark the landmark occasion, a new trophy designed by Alexsandra Pontonio and crafted by Simon Wrangles was presented.

Retired County Court Judge, Jane Patrick (Brighton Vic), won the Be Immortalised in Fiction Competition, which means her name will be included in the next crime novel by Meg Mundell.

The sponsor of the 2020 Davitt Awards was again Swinburne University of Technology.

The Davitts, named after Ellen Davitt, the author of Australia’s first mystery novel, Force and Fraud, in 1865, cost publishers nothing to enter. No prize money is attached.

The Davitt Awards ceremony can be viewed on Sisters in Crime’s YouTube channel.