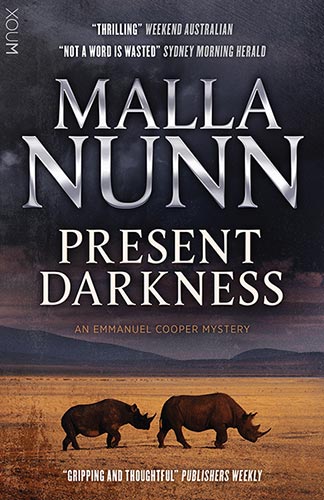 Author: Malla Nunn
Publisher: Xoum Publishing
Copyright Year: 2014
Review By: Sue Turnbull
Book Synopsis: South Africa during the 1950s and the fissures of apartheid run deep. People are divided not just by race, but also within themselves, and Detective Sergeant Emmanuel Cooper embodies all the contradictions.

Of course there’s a crime, several in fact, to get things moving. A white prostitute is snatched from an alleyway in downtown Johannesburg; a middle class high school principal and his wife are found brutally battered in the emphatically white suburb of Parkview. But in this, the fourth in a series by Swaziland born author, Malla Nunn, the real interest resides in the character Cooper.

Present Darkness finds Cooper still conducting a double life and wrestling with his weird alter-ego, a Scottish Sergeant Major whom he has brought back from service in the second world war. Residing ‘deep in the psychological trench’ of Emanuel’s consciousness, the Sergeant Major tends to make his bossy presence felt at times of crisis when Cooper needs to act decisively and instinctively.

Still passing as white (his mixed race origins would immediately disqualify him from the South African police force), Cooper is now living in secret with a mixed-race woman. She is also the product of an illegal relationship between a white man and a black woman, and has a mixed-race child. Every day, and in every way, Cooper is breaking the law and the stakes have never been higher.

In defence of Cooper’s duplicity, apartheid is the real crime here. As Nunn notes in passing, the segregation laws were based in part on the idea ‘that the tide of physical attraction flowed inexorably from black men to white women and not the other way around’. Without overstating the case, Nunn ensures we know apartheid is bad by ensuring all those who support are thoroughly unlikeable.

In Present Darkness, the unlikeable include Cooper’s new boss, Lieutenant Mason, ‘a born again, praise the Lord Christian’ whom Cooper hates ‘with a purity’ that verges ‘on the religious’. This is hardly surprising given Mason is a nasty piece of work, hell-bent on discrediting Cooper even as the detective sergeant efficiently goes about the business of sorting out the complicated motivations underlying the Parktown assault and locating the missing prostitute.

Approaching the scene of the crime lit by ‘the flashing lights of a street cruiser’, Cooper is well aware that the moment he crosses the perimeter he will leave ‘ordinary behind’. While the ‘fat moon’ may still be ‘tangled in the branches of a jacaranda tree’ and the air is full of the smell of ‘fresh cut grass’, the scene that awaits him will be chaotic and bloody. Nunn’s sensuous descriptions of place are compelling.

Inevitably, the case comes too close for comfort. One of the suspects in the home invasion is the son of Cooper’s Zulu colleague and friend, Inspector Shabalala of the native police. And the enquiry will take Cooper reluctantly back to his slum roots and teenage gangster days in the black township of Sophiatown.

What makes Cooper such an interesting (and excellent) detective is his ability to straddle the divide which separates class, race and cultures. But it’s a perilous balancing act. Nunn’s achievement is to keep us caring about the consequences if Cooper loses his footing. Present Darkness manages the tension beautifully.
First seen in The Age and the Sydney Morning Herald