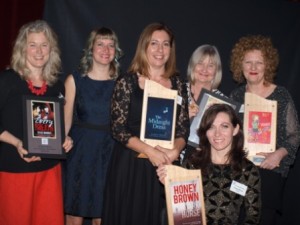 Burial Rites, Hannah Kent‘s multi-award winning crime novel about the last woman to be executed in Iceland, has two more prizes to its credit – the Davitts for Best Debut Novel and the Readers’ Choice Award.

Kent, who has recently shifted to Melbourne from Adelaide, was one of seven authors honoured at Sisters in Crime’s 14th Davitt Awardsfor best crime books by Australian women on Saturday (30 August) at Melbourne’s Thornbury Theatre. A total of 76 books was in contention. 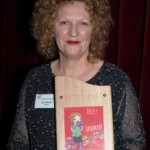 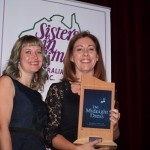 A book about sex and the AFL was a winning kick for Melbourne-based writer, Anna Krien, who won the Davitt (Best True Crime Book) for Night Games: Sex, Power and Sport (Black Inc). (Anna was unable to attend – was being held hostage by two miniature monsters, in particular a hungry newborn who won’t take the bottle.) 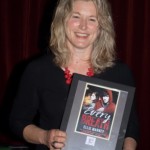 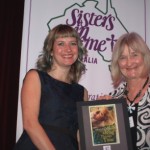 Lauren Beukes (below left), the South African award-winning writer of crime and fiction with a speculative edge, presented the Davitts before an audience of crime writers and fans from all over Australia after a playful interrogation by Professor Sue Turnbull. 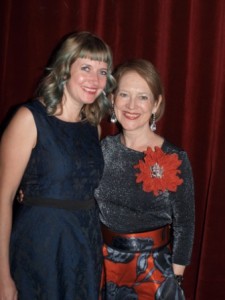 In an amusing twist, Beukes won the Be Immortalised in Fiction competition so her name will appear in Brown’s next novel. Beukes begged to be cast as a serial killer!

Professor Turnbull, also a national co-convenor of Sisters in Crime and crime reviewer for Fairfax Media, said that Sisters in Crime was overwhelmed that a record 76 crime books were in contention this year, a far cry from the seven in competition at the inaugural awards.

“When I reviewed Lauren Beukes first crime novel, The Shining Girls, I remarked on the ‘promiscuous hybridity’ of crime writing. This applies equally to Australian women’s crime writing and the books in contention this year.

“When the Davitt awards were inaugurated 14 years ago, the heroes of women’s crime books were often PIs. Now they’re as likely to be cafe owners, yarn-bombers, financial investigators or forensic physicians. Romance, as well as forensics, is in the mix. The scenes of the crime are wildly different, the plots multifarious,” she said.

“Many of us got our taste for crime from a childhood spent devouring Enid Blyton’s Famous Five, went through adolescence with Agatha Christie and Dorothy L Sayers and graduated with Sara Paretsky and Marcia Muller. Meanwhile, new generation of women writers has emerged with imaginative and enthralling novels aimed at the children’s and Young Adult markets.” 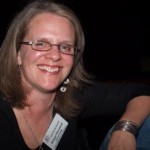 Jacqui Horwood (above), who presented the judges’ report, said this year Sisters in Crime had decided to offer its first-ever Davitt for Best Children’s book

“In the past children’s books have had to compete with Young Adult books which has not been entirely equitable. And really there’s never been the number of children’s books to justify a separate award. This year was different with 13 in contention and so much quality writing in evidence.”

The Davitt judges declared Burial Rites “a beautifully crafted and well-paced book”. It was also voted best book by the 660 members of Sisters in Crime. Kent was unable to attend but accepted via video.

Horwood said Jen Storer’s Truly Tan: Spooked! possessed the “perfect mix to lure young readers into the wonderful world of mysteries”. The fourth book in the series, Truly Tan: Freaked! will be released in November.

The judges’ reports and winners’ acceptance speeches are attached.

Click here to read the Sunday Age article (31/8/14) about the Davitts, including an interview with Honey Brown, the winner of the Best Adult Novel Davitt.

Click here to read an article in The New Daily re the Davitts and women crime writers more generally.