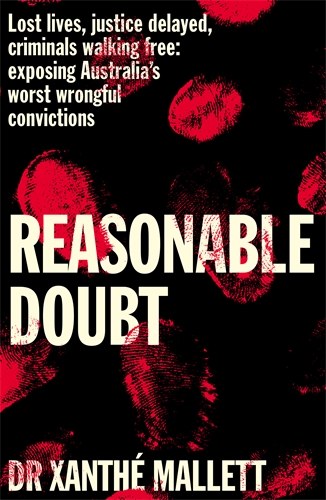 We all put our faith in the criminal justice system. We trust the professionals: the police, the lawyers, the judges, the expert witnesses. But what happens when the process lets us down and the wrong person ends up in jail?

Henry Keogh spent almost twenty years locked away for a murder that never even happened. Khalid Baker was imprisoned for the death of a man his best friend has openly admitted to causing. And the exposure of ‘Lawyer X’ Nicola Gobbo’s double-dealing could lead to some of Australia’s most notorious convictions being overturned.

Forensic scientist Xanthé Mallett is used to dealing with the darker side of humanity. Now she’s turning her skills and insight to miscarriages of justice and cases of Australians who have been wrongfully convicted.

Exposing false confessions, polices biases, misplaced evidence and dodgy science, Reasonable Doubt is an expert’s account of the murky underbelly of our justice system – and the way it affects us all.

Many Australians who follow true crime television series and crime news stories will have seen forensic anthropologist Xanthe Mallett appearing as an expert contributor. They may also know her from reading or browsing her books of controversial and disturbing cases, Mothers Who Murder (2014) and Cold Case Investigations (2019).

Now Mallett has assembled a third collection of case analyses, this time focusing on miscarriages of justice, specifically wrongful convictions. Reasonable Doubt is a book with appeal for both generalist readers and undergraduates in areas relating to criminology. The expert inserts, such as the one on forensic linguistics supplied by Diana Eades, can be skipped over or appreciated depending on the reader’s level of interest.

With Mallett surveying six cases picked from the years 1983-2019 and from four Australian states (Queensland, WA, SA and Victoria), it’s likely even the most casual reader will find at least one chapter really engrossing. In each instance Mallett advances the arguments of experts who find faults in the case made against an accused. She also acknowledges the opinions of experts who supported the prosecution. So, while most of these cases will appear to amateur readers to be definite instances of injustice, and we can confidently feel angry and sad on behalf of the wrongly imprisoned, there are still aspects open to debate and doubt.

For the non-expert reader, consuming all six chapters is likely to have a cumulative effect. Where one instance of a wrongful conviction might rouse your indignation and another matter leave you uncertain about the degree of injustice, the impact of all these questionable convictions is strong. It reinforces the argument Mallett makes in her Introduction: that collectively these cases show up systemic failings in this country’s justice system. Mallett notes that “for every case I have included there are 100 others I could have chosen, which would have highlighted the same failings and errors that led to an innocent person going to prison”.

In her Conclusion Mallett champions a Melbourne-based Innocence lobby, RMIT’s Bridge of Hope. These kinds of social justice initiatives are valuable and deserve our support. Chapter five, about a young man petitioning with Bridge of Hope help to have his murder conviction overturned, illustrates the likelihood of racial bias and misidentification by eyewitnesses. As Mallett admits when she reaches her section on evidence, “This is where things get a little messy.” This chapter was the least easy to read, I found. However, the importance of Catriona Havard’s expert insert on misidentification based on race can’t be underestimated.