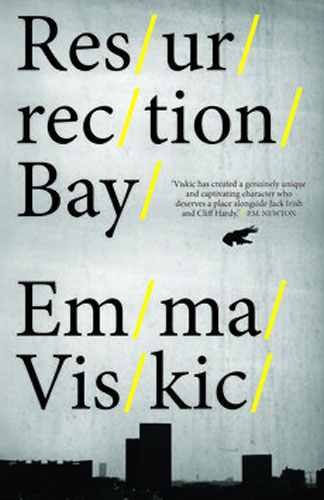 Synopsis:
Caleb Zelic, profoundly deaf since early childhood, has always lived on the outside – watching, picking up tell-tale signs people hide in a smile, a cough, a kiss. When a childhood friend is murdered, a sense of guilt and a determination to prove his own innocence sends Caleb on a hunt for the killer. But he can’t do it alone. Caleb and his troubled friend Frankie, an ex-cop, start with one clue: Scott, the last word the murder victim texted to Caleb. But Scott is always one step ahead.

This gripping, original and fast-paced crime thriller is set between a big city and a small coastal town, Resurrection Bay, where Caleb is forced to confront painful memories. Caleb is a memorable protagonist who refuses to let his deafness limit his opportunities or his participation in the investigation. But does his persistence border on stubbornness? And at what cost? As he delves deeper into the investigation Caleb uncovers unwelcome truths about his murdered friend – and himself.

True to form, Resurrection Bay begins with a dead body. While Melbourne-based author Emma Viskic is evidently familiar with the conventions of the crime genre, this is where her invention immediately kicks in. The dead man is cradled in the arms of his best friend, who is profoundly deaf and waiting for the paramedics to arrive. It’s an arresting start, establishing both the tone (dark) and the style (telegraphic) of Viskic’s first crime novel, featuring an unusual and engaging hero.

Caleb Zelic has been deaf since a bout of meningitis at the age of five, but is reluctant to acknowledge his hearing loss in public. As his ex-wife, Kat, tells him somewhat testily, his desire to pass as normal has resulted in all sorts of problems for waitresses, taxi drivers and those who love him, not to mention the fact that he may inadvertently end up with whipped cream in his long black.

There are many such moments in this book as Caleb struggles to comprehend exactly what is going on around him. These include his efforts to follow the indistinct speech of a man with a “letterbox mouth”; the puzzling consonants of a Spanish waitress; an old lady who shouts in the mistaken belief that this will help him read her lips. And then there are the garbled attempts at Auslan signing from his business partner, Frankie, who confuses love with sex. Caleb’s silent world is hauntingly rendered as he struggles to make sense of it all.

But Caleb is a determined man who, having once set upon a course of action, is unlikely to deviate no matter the consequences. Having decided to track down the killer of his best friend, he blunders from one disaster to the next, acquiring the cuts, bruises and emotional scars of the damaged hero along the way. Meanwhile, ex-cop Frankie will slide disastrously off the wagon while Caleb’s brother and ex-wife are reluctantly sucked into the vortex of violence that seems to follow Caleb around like a tornado.

Viskic has written a rattling plot-driven thriller that is not for the faint-hearted. It is, however, definitely one for those who appreciate a well-crafted sentence that never takes a predictable turn. There is much to admire here.

This Review appeared first in the Sydney Morning Herald in December 2015.