Scared Yet? by Jaye Ford 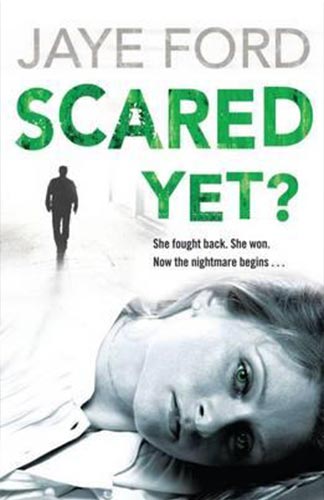 Author: Jaye Ford
Publisher: Random House
Copyright Year: 2012
ISBN: 978-1-86471-200-1
No of Pages: 454
Review By: Vikki Petraitis
Book Synopsis: When Livia Prescott fights of a terrifying assault by a masked attacker in her work car park, the media hails her a hero. The following day, a note arrives from an anonymous sender taunting her, saying she lied in her TV interviewed, and that she was really terrified, not brave. Livia shows the note to the police, but since it isn’t a threat, the police can do little about it. Meanwhile Livia’s life is going down the toilet – her husband has left her for a young attractive woman, and insisted on shared custody of their son, her business is failing, her father is dying in hospital, and her new townhouse is cold and lonely on the weeks her son isn’t with her. The notes keep coming and they become more sinister. Then the stalker turns violent – a friend is badly injured in a car crash, and a colleague is nearly killed. Livia is faced with the choice – to fight back, or to stay down for the count.

I joined the Good Reads website at the beginning of the year and love adding all the books that I’ve read. The website also has reviews and I peaked at a few before I read Scared yet? Most of the reviews began with a variation of: I couldn’t put this down, or OMG, I read it all night and could hardly function at work the next day. Like me, Jaye Ford is a fan of Nicci French, the husband and wife writing team who produce wonderful psychological thrillers. I could see the influence in this novel. What I most enjoyed about Scared yet? was that Livia Prescott is a strong character. I have little time for the female protagonist who faints or waits to be rescued. Even though her life is bleak, Livia retains the fighting spirit that was bred into her by her boxing champion father as she grew up living above a boxing gym. As a reader, I also loved that Livia reacts with a satisfying mix of anger as well as fear as the stalker gets closer and closer. In a recent interview, Jaye Ford said that she wanted to write about how real women might react when put in extraordinary circumstances. I think that this is the strength of Jaye’s novels. Real women read them and think: this could happen to me. And then get the chills.