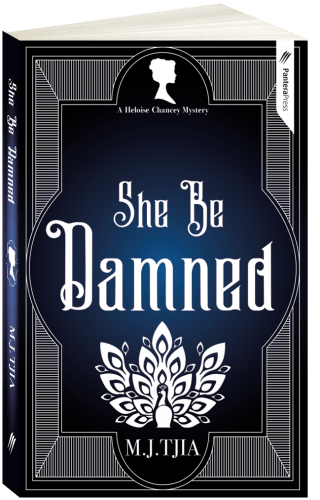 London, 1863: Women in Waterloo are turning up dead, their sexual organs mutilated and removed. When another girl goes missing, fears grow that the killer may have claimed their latest victim.

The police are at a loss and so it falls to courtesan and professional detective, Heloise Chancey, to investigate.

With the assistance of her trusty Chinese maid, Amah Li Leen, Heloise inches closer to the truth. But when Amah is implicated in the brutal plot, Heloise must reconsider who she can

She Be Damned is the first novel in the Heloise Chancey series.  Heloise is a beautiful courtesan, living in the lap of luxury thanks to her rich lovers, but she is so much more than that.  She is feisty, intelligent and independent, and uses her unique skills to help solve crimes.

In this book, set in London in 1863, the prostitutes of Waterloo are being brutally murdered, with their sexual organs mutilated and removed.  At the request of Sir Thomas Avery, who owns a private detective agency, Heloise is hired to find a missing girl – Eleanor Carter.  Eleanor is from a good family, but, having fallen pregnant, is disowned by her family and sent to a convent.  However, she never makes it to her destination, and the trail has gone cold since her last movements were traced to a “house of ill-repute”.  Her father is concerned for her safety, and, with the assistance of his friend, Mr Priestly, has enlisted the help of Sir Thomas to find her.  As Heloise so eloquently puts it:  “He might have thought of that before he threw her out onto the street”.

Heloise returns to the streets to find Eleanor, using her contacts from her past life as a prostitute.  Her investigations lead her back to her old haunts, and there are lots of unsavoury suspects to choose from.  There’s Madame Silvestre, Heloise’s old madam and the owner of the brothel where Eleanor was last seen; Dr Mordaunt, a drunkard who has performed abortions for the street girls, and his slimy assistant; Dr Blain, another doctor who has “helped” the street girls; and Mr Priestly, a “prig” of a man for whom Heloise formed an instant dislike, just to name a few.  There’s also someone putting nasty notes through Heloise’s letterbox, and a mysterious black carriage that seems to be following her.

The book is narrated by Heloise in the first person, present tense, which is my least favourite point of view.  However I’m finding that a lot of books are written in that tense and although I’ll never really like it, I’m getting used to it!  Interspersed with Heloise’s story are short passages from the point of view of her maidservant, Amah.

Does Heloise find Eleanor, and the murderer?  Of course she does, but not before there’s another grisly death or two.  There’s sex, death, intrigue, and a nice little twist involving Amah that I didn’t see coming.  I didn’t pick the murderer, either.  The historical details are woven in nicely without being too overdone.

I didn’t really warm to Heloise, though, and occasionally I found the writing a little stilted.  But it didn’t stop me from wanting to read on and find out whodunit.  All in all an interesting historical mystery that’s well worth a few hours of your time.