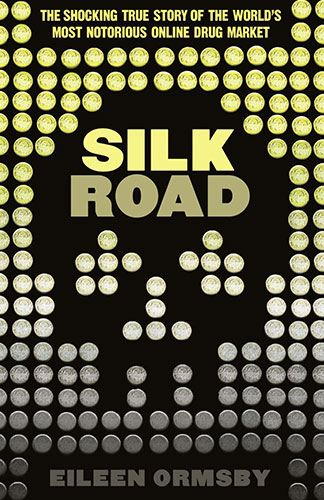 Author: Eileen Ormsby
Publisher: Pan MacMillan Australia
Copyright Year: 2014
Review By: Diana Olsberg
Book Synopsis:
It was the ‘eBay of drugs’, a billion dollar empire. Behind it was the FBI’s Most Wanted Man, a mysterious crime czar dubbed ‘Dread Pirate Roberts’. SILK ROAD lay at the heart of the ‘Dark Web’ – a parallel internet of porn, guns, assassins and drugs. Lots of drugs. With the click of a button LSD, heroin, meth, coke, any illegal drug imaginable, would wing its way by regular post from any dealer to any user in the world. How was this online drug cartel even possible? And who was the mastermind all its low roads led to? This is the incredible true story of Silk Road’s rise and fall, told with unparalleled insight into the main players – including alleged founder and kingpin Dread Pirate Roberts himself – by lawyer and investigative journalist Eileen Ormsby. A stunning crime story with a truth that explodes off the page.

Reading Silk Road is like entering an entirely parallel universe. Here I thought I was a fairly up to the minute academic, only to discover a whole separate world which had been, and probably is in some permutations, still operating.

“Lots of drugs. With the click of a button, LSD, heroin, meth, coke, marijuana, any illegal drug imaginable, would wing its way by regular post from any dealer to any user in the world.”

But this is more than just a trail of an online illegal drug cartel. What Ormsby reveals is the tale of a charismatic mastermind and his platoon of administrators and sellers promulgating a kind of liberalist society, free of government intrusion or control of people’s lives, a liberation for the individual regularly promised in philosophically couched diatribes and online forums. Silk Road promised what the site’s pseudonymous founder ‘Dread Pirate Roberts’ referred to as his “agoristic” philosophy – “we could be a shining beacon of hope for the oppressed people of the world, just as so many oppressed and violated souls have found refuge here already”. Agoristic was not a word I knew. but presumably derives from the Ancient Greek agora or marketplace where democracy flourished.

Give me a break !!! What we are talking about here was an online black market, a platform for selling illegal drugs mainly, but also guns and alleged assassinations or murder for hire.

Nevertheless, Silk Road and ‘Dread Pirate Roberts’ and his acolytes gained a cult-like following and loyalty as customers felt they were indeed part of a revolution, a personal challenge to the nanny state. And of course conveniently they were able to get whatever drugs they wanted in a way which assured product quality and safety without the incipient violence and criminal threat of on the street dealing.

Silk Road operated as part of the Dark Web as a Tor hidden service such that online users were able to browse it anonymously and securely without potential traffic monitoring from law enforcement. The website was launched in February 2011, eponymously using the trade mark of an old world of trading which connected the economics and cultures of Asia, Africa and Europe through international trade agreements and movement of goods.

Silk Road’s founder ‘Dread Pirate Roberts’, using new technologies most notably the development of Bitcoins a cryptocurrency which offered a volatile but untraceable form of monetary payment, thereby established a framework of trading partners who were required to follow strict trading procedures. These offered trading security for sellers and buyers, but also provided a means whereby Silk Road was able to deduct commission on every purchase and transaction. And which of course guaranteed that the Silk Road would be paved with gold for the site operators. But it seemed like a win/win for everybody. Traders and buyers were ecstatic. Media outlets welcomed it, calling it “a useful service”, “this is an example of something really useful”. But not surprisingly, the website also attracted scammers ,cheats and scoundrels, although the turbulence did not seemingly detract from Silk Road’s success with dealers and buyers.

Except of course for law enforcement officers throughout the world. Most notably, the US Federal Bureau of Investigation (FBI), which after many months of investigations and some would argue clandestine strategies, shut down the website and arrested Ross William Ulbricht under charges of being the infamous ‘Dread Pirate Roberts’. In November 2013, Silk Road 2.0 came online run by former administrators of Silk Road, but it too was shut down and operators were arrested. Ulbricht was convicted of a range of charges – money laundering, computer hacking, conspiracy to traffic narcotics and attempting to have six people killed, and was sentenced to life in prison. His previous valiant attempts to fight law enforcement – such as telling the market it’s better to “live one day as a lion than a hundred years as a lamb” – must ring hollow now.

The success of Silk Road and its demise has, according to Ormsby, bred competition and the rise of other black market online systems. But the first mover advantage of Silk Road, and its record as a trusted and successful platform, inspiring a cult-like psychology of brand loyalty has limited the success of others in the Dark Net drug economy. The importance of the Silk Road was indeed that drug users now know that there are alternatives to buying from the streets, connections can be made, and relationships established. There is no doubt that Silk Road changed the face of illicit drug dealing.

Eileen Ormsby’s book Silk Road is an engrossing account of true crime, a story which is most particularly engaging for Australians as the site achieved its greatest success in this country. Whether it is that, as so widely documented, we are a country which notably takes up new technologies far in advance of other countries, or whether it is our deep-seated culture of larrikinism and anti-authoritarian culture is unexplained. As a now grey-haired libertine myself, I plump for the latter explanation !!!