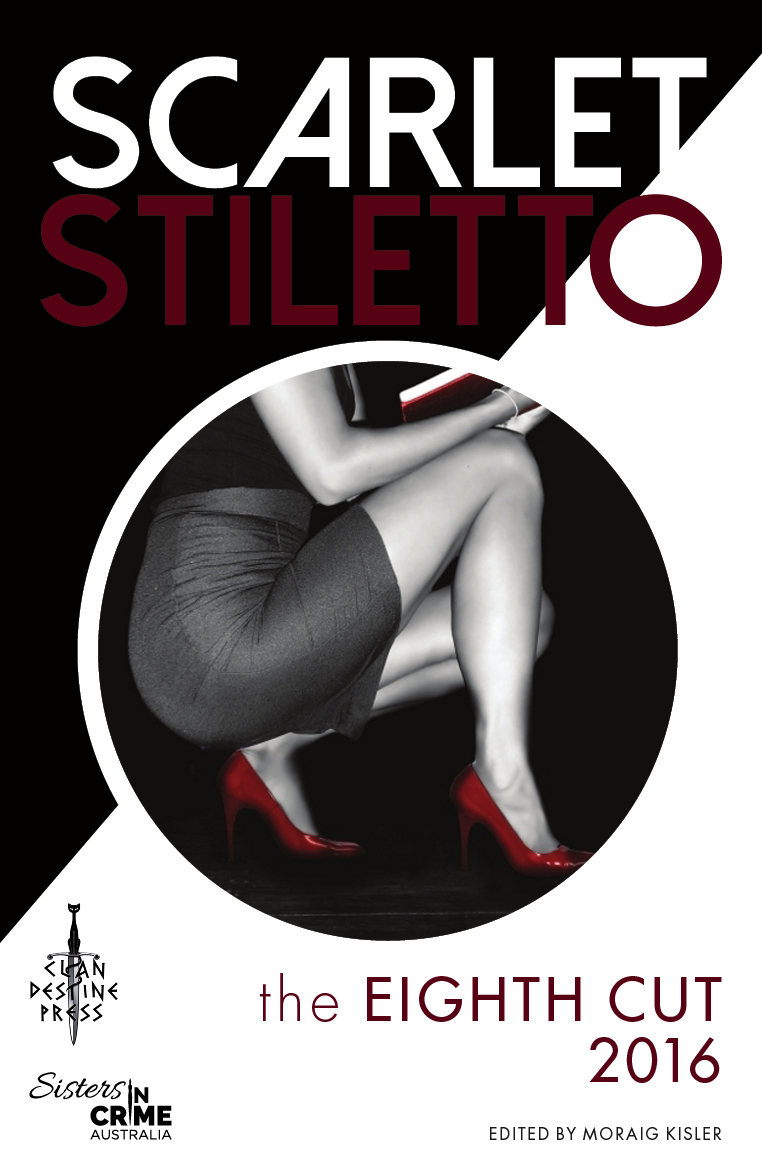 One of the highlights of SheKilda3 was the launch of six e-book collections of winning Scarlet Stiletto stories by Clan Destine Press, 2011-2016.

Author and 2011 Scarlet Stiletto winner, Angela Savage, did the honours. Here’s what she had to say 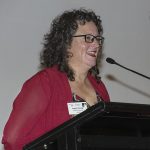 To help celebrate 25 years of Sisters in Crime, it’s my pleasure today to launch six new e-books comprising the winning stories across all categories of the Scarlet Stiletto Awards from 2011 to 2016. This includes tonight’s winners, all of whom I’d like to sincerely congratulate.

The e-books are published by Clan Destine Press, and a great job they’ve done of it, too. The anthologies start with Scarlet Stilettos The Third Cut in 2011, which features the winning story by yours truly, and continues through the Fourth, Fifth, Sixth, Seventh and Eight cuts respectively, the latter featuring tonight’s winners. These anthologies showcase the breadth of talent, imagination and – let’s face it – murderous fantasies that fuel women’s short crime fiction writing in Australia.

A couple of years ago, I conducted research for an article to commemorate the 20th anniversary of the Scarlet Stilettos – you can find it on the Sisters in Crime website if you search for ‘Red Shoes’. What came through overwhelmingly as I interviewed past winners was the role of the Scarlet Stiletto Awards and the Sisters in Crime in giving us the confidence to write, to dare to call ourselves writers.

Of course, supporting women crime writers and readers is the raison d’être of Sisters in Crime. That support takes all kinds of forms. When founding member and co-convenor Carmel Shute recently asked her sisters to shoot her if she ever suggested holding another SheKilda women’s crime writing convention, for example, several sisters helpfully revealed that they had firearms training and, before you knew it, Carmel had assembled her own personal firing squad. That’s the kind of practical and moral support the Sisters have always provided for each other. But I digress…

In the 23 years to 2016, over 3,000 stories have been entered in the Scarlet Stiletto Awards, with 22 winners, including category winners, going on to have crime books published. Twenty-two books in 23 years – that’s an astonishing hit rate, no pun intended. Come to think of it, the hit rate is even higher when you factor in that many of us have published multiple books. Some of those books even feature characters who first appeared in Scarlet Stiletto award entries. Believe me, I know this first-hand.

The success of the Scarlet Stiletto Awards in supporting the emergence of Australian women crime writers is all the more remarkable when you consider that the whole thing is a labour of love. The convenors and former convenors who do the judging do so in a voluntary capacity. That they say it is one of their favourite things to do doesn’t abnegate the time and effort involved in keeping those red shoes polished till they sparkle. Let’s take a moment to thank the Scarlet Stiletto Award judges, past and present, for their generosity and commitment to this venture.

Reading through ‘the Cuts’, as I’m nicknaming these six e-books, is guaranteed to satisfy all of us with an appetite for reading great women’s crime fiction, as well as inspiring both the emerging and established writers among us. The stories are genuinely engrossing. Trust me: I read them on the train to and from Waurn Ponds and completely missed 90 minutes each way of uninspiring scenery. With stories that range from the dark and disturbing, to the comic and cosy, you may well discover a new favourite author – or, if the Sisters’ track record is anything to go by – a favourite future author among those contributing to these anthologies.

The other thing that strikes me about these stories is the diverse range of voices, and the imaginative risk taking of the featured women writers. Women imagine themselves inside the heads of criminals and killers, vengeful victims, diligent detectives, even non-human animals on occasion. These experiments in creativity and empathic imagining can only be encouraged. In these dark political times we seem to have entered, the ability to imagine ourselves in another’s shoes, and to encourage our readers to do likewise, becomes increasingly important.

All the Scarlet Stiletto Cuts are available now from the Clan Destine Press website in both ePub and Kindle formats, as well as from Amazon, Kobo and iTunes. They will also be available later next week from Booktopia.

Perhaps the most apt metaphor for what the Scarlet Stiletto Awards have meant for so many of us comes from my daughter. She was seven years old back when I was researching my 20th anniversary article and as I pulled the Scarlet Stiletto trophy I won in 2011 down from the bookshelf, she confessed she and her BFF (‘Best Friend Forever’) had a game they played with it.

“We pretend it’s a magic shoe,” she told me. “You put your foot in it and make a wish and it takes you wherever you want to go.”

Thanks to the Sisters, and to the Scarlet Stiletto Awards, for taking me where I wanted to go.

And I commend the Third, Fourth, Fifth, Sixth, Seventh and Eighth Cuts of award winning short stories to you all.