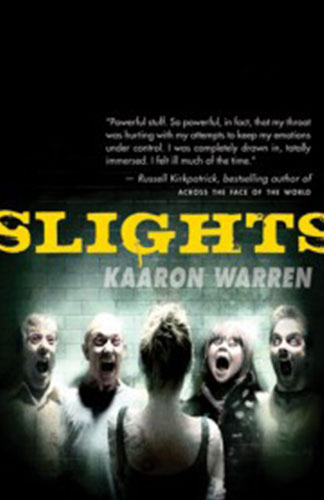 Author: Kaaron Warren
Publisher: Harper Collins
Reviewed by: Angry Robot
Book Synopsis:
Slights opens with the death of Stevie’s mum at her own hands. This death was an accident – Stevie overindulged at a dinner with her mother, celebrating a lottery win and crashes the car on the way home. Stevie’s mother dies and Stevie experiences her third near-death experience. In Stevie’s version of a near-death experience, she enters a cold room full of stink and clicking and people who hate her because she has slighted them in the past. And Stevie has slighted a lot of people in her past.

To describe Stevie as antisocial would be a vast understatement. She is unable to interact in a civil or vaguely socially appropriate manner with anyone, including her brother, her closest living relative and also the closest thing she has to a friend. Stevie’s father, who she recalls with hero-worship, was shot and died when she was nine. But Stevie’s father wasn’t as perfect as she remembers through her rose-tinted glasses.

Slights is written from Stevie’s point of view which can be a very disturbing experience indeed at times, although strangely she also has a certain naive charm. The novel starts when she is eighteen and each chapter is another year, often around the time of her birthday. As her disturbed and often delusional present unfolds, we learn of Stevie’s frequently dysfunctional past and the hints about her father. After her mother’s death, she spends her time digging in the backyard – not gardening, just digging. Through her digging she uncovers all manner of things which she does not openly question for some time. When she does, she doesn’t really what to know the answers and sabotages her own efforts to find them.

As Stevie becomes increasingly removed from society, she seeks to return to the “room” she visits in her near-death experiences. At first she does this via suicide attempts, but later she wants to know if others see what she sees and starts killing, although not often and not immediately.

It is difficult to sum up this book because it will not be to everyone’s taste, but then neither is Danielle Steele or James Patterson. Slights is written compellingly and kept this reader intrigued and reading. An unique voice.