Slips of the tongue (& pen): How forensic linguistics is transforming crime detection

Georgina Heydon, Associate Professor in Criminology and Justice Studies at RMIT, was the star attraction at Sisters in Crime 2013 Law Week event. Now the President of the International Association of Forensic Linguists, Georgina organised the sponsorship of the inaugural award for the Best Forensic Linguistics Story in the 2018 Scarlet Stiletto Awards.

Here she explains what forensic linguistics is and how word usage, grammar, punctuation and syntax can unmask criminals.

Forensic linguistics is the analysis of language in a legal setting. It is somewhat analogous to forensic psychology, in that the forensic application can be part of a crime scene investigation, or it can be broadly contributing to justice and legal process.

For instance, a forensic linguist might analyse the language used in an anonymous threatening letter sent to a murder victim to determine if it might have been written by the prime suspect. 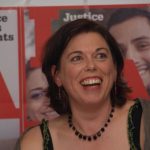 Other branches of forensic linguistics are concerned with the language of justice institutions, such as police interrogation, judges’ decisions or courtroom cross-examination. Forensic linguistics is becoming ever more important because of the sheer volume of written and spoken material captured online and available as evidence in civil and criminal cases.

Written and spoken language can be analysed systematically by trained linguists using sophisticated techniques such computational parsing of written text or spectrographic analysis of voice recordings.

The International Association of Forensic Linguists believes that the justice system is urgent need of linguistic expertise, and yet few people even know what linguists do. Most people did not learn basic grammar at school, let alone the complexities of phonetics, phonology, morpho-syntax, semantics, sociolinguistics, pragmatics and discourse analysis.

Yet these are the basic tools for the systematic analysis of language. Determining the likelihood of common authorship of two documents, or what was said on a muffled wiretap recording is not the job of a lay person: a qualified linguist is required.

Linguistic expertise is also vital in contested cases of language proficiency, such as when a person who speaks a language other than English has been denied an interpreter.

When as President of the IAFL, I wanted to raise public awareness about linguistics and language in the justice system, I reached out to the Sisters in Crime, where I knew I would find writers most likely to appreciate the forensic analysis of language.

Crime writers are perfectly positioned as aficionados of justice and language. The IAFL looks forward to seeing how their expertise is represented in fiction, and hope that it is every bit as intriguing as the real thing.