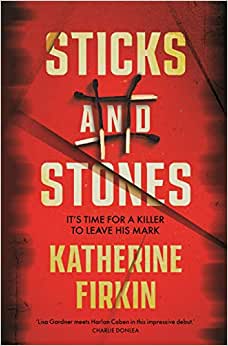 It’s winter in Melbourne and Detective Emmett Corban is starting to regret his promotion to head of the Missing Persons Unit, as the routine reports pile up on his desk.

So when Natale Gibson goes missing, he’s convinced this is the big case he’s been waiting for – the woman’s husband and parents insist the devoted mother would never abandon her children, and her personal accounts remain untouched.

But things aren’t all they seem. The close-knit Italian family is keeping secrets – none bigger than the one Natale has been hiding.

Just as the net seems to be tightening, the investigation is turned on its head. The body of a woman is found . . . then another.

What had seemed like a standard missing person’s case has turned into a frightening hunt for a serial killer, and time is running out.

But to really understand these shocking crimes, Emmett and his team will need to delve back through decades of neglect – back to a squalid inner-city flat, where a young boy is left huddling over his mother’s body . . .

Along with titles naming conditions such as trust and peace, perhaps longingly or ironically, recent Australian crime fiction is offering the honest male cop as protagonist. This character shines in remote postings and small policing units, where he attends to everyday citizens’ concerns, improvising as necessary to get sustainable and fair outcomes.

Sometimes the honest cop is as judgy or grumpy as he is good, but he’s able to admit mistakes and improve on his attitudes, even in the face of undeserved hostility from officers called in for important investigations. While usually of mainstream white descent, he is willing to learn from and cooperate with diverse communities. He’s disturbed by the social impacts of illiberal cults. And he cannot avoid noticing local environmental damage.

One of the new generation of fictional Good Cops is Victoria Police’s Detective Senior Constable Emmett Corban, created by journalist and debut novelist Katherine Firkin. Old-school words such as “decent” and “honourable” don’t figure in this novel’s vocabulary. And with Emmett not one for abstractions, and his past apparently clean of stuff-ups and traumas, his character must be deduced from his current behaviour and demonstrated willingness to improve.

Firkin’s Missing Persons Unit is a small and non-prestigious outfit subject to departmental sledging and funding cuts. As its head, Emmett must make more judgement calls than most police do. When we first meet Emmett, he’s jaded and trying to push back against the cynicism that comes with knowing that many of the people reportedly missing don’t want to be found (absconding spouses, for instance).

Emmett is unenthused when a limping, whiny man he finds distasteful reports his middle-aged sister missing. The second case that comes in — a wife who failed to collect her children from an activities program and cannot be found – is of more interest to Emmett because he has a wife and young son.

When it is the body of the missing sister that is found first, her chest marked with incisions in a geometrical shape, Emmett is remorseful that he under-estimated the genuine and serious nature of the brother’s report. Discovering more about the suffering the brother has carried since childhood, he feels compassion too. Did he do enough, he asks himself, with this becoming a refrain as more women are reported missing and a second, similarly marked body is found.

Much of the action is in Melbourne’s inner north-western suburbs, where areas degraded by infrastructure development and littering are obvious grounds for environmental concern.

Firkin’s narrative is told in various voices. To readers who find this off-putting at first, I’d say persevere. This is the text equivalent of those screen entertainments that switch between points of view and locations, requiring the viewer to grasp who’s who and how they connect. Emmett has the legs for further investigations and more personal growth, as does his wife, Cindy, and I hope we’ll meet them again.