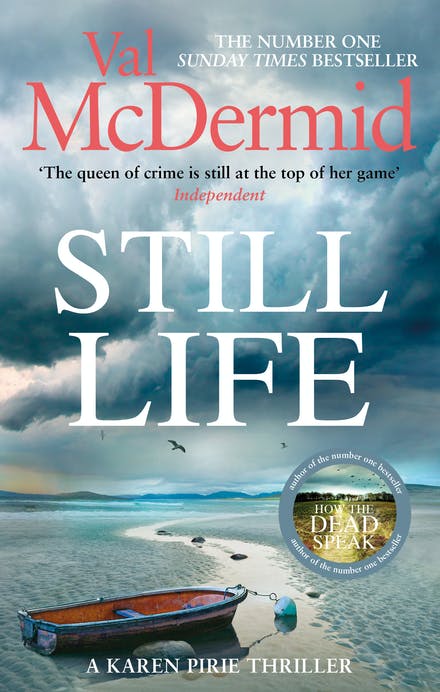 On a freezing winter morning, fishermen pull a body from the sea. It is quickly discovered that the dead man was the prime suspect in a decade-old investigation, when a prominent civil servant disappeared without trace. DCI Karen Pirie was the last detective to review the file and is drawn into a sinister world of betrayal and dark secrets.

But Karen is already grappling with another case, one with even more questions and fewer answers. A skeleton has been discovered in an abandoned campervan and all clues point to a killer who never faced justice – a killer who is still out there.

In her search for the truth, Karen uncovers a network of lies that has gone unchallenged for years. But lies and secrets can turn deadly when someone is determined to keep them hidden for good . . .

Val McDermid has a record of narratives that go to pain and grim conflicts, though she is also strong on brio and humour. In her DCI Karen Pirie series, the newest novel, Still Life, includes Covid as a local reality.

Most of the novel’s action takes place in February 2020 and is unaffected by contagion restrictions, but McDermid adds a closing chapter set in late March and addressing the need for all members of the policing team to have suitable accommodation for the imminent lockdown.

When Still Life begins, a personal grievance is more important to Karen. The man responsible for the death of her colleague and lover, Phil, is to be released from prison, and the forthright Karen is tempted to stalk and harass him.

Fortunately work imperatives haul Karen away. As head of the Historic Cases Unit, she receives orders from a high-level officer, a caricature of self-interest, to investigate recent developments in an old case with a political dimension.

Back in 2010, when agitation for an Independence Referendum was an important consideration, two Scottish brothers, one a senior civil servant based in London, disappeared without trace. Now the body of one of them has turned up near Fife, recently killed: by whom? why?

While Karen and French-speaking sergeant Daisy head to France and then Ireland, Karen’s inexperienced junior in Historic Cases, Jason, is left to pursue the mystery of unidentified skeletal remains discovered in Perth, ‘the petty bourgeois capital of Scotland’. Jason and Karen have already visited a remote artists’ community, and there has been consultation with experts, one of them Australian-born digital forensics specialist Tamsin, whose look is punk and bribe of choice biscuits.

As the novel’s title hints, the visual arts feature, and although both storylines are improbable McDermid delivers yet another book that is both entertaining and worldly wise.