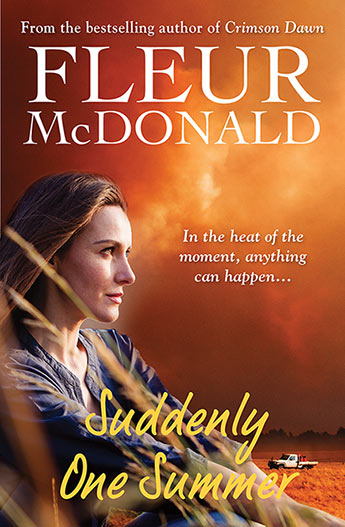 When Brianna Donahue was three years old, her mother mysteriously disappeared while farming in Merriwell Bay, Western Australia. Her body has never been found. Brianna works the same land with her father Russell, while almost single-handedly raising her two children as her husband Caleb works as a fly-in fly-out criminal lawyer in Perth.

One scorching summer’s morning, her son Trent goes missing and, while frantically searching for him, Brianna must come to terms with the fact that her marriage has large cracks in it.

Over two thousand kilometres away in South Australia, Detective Dave Burrows receives a phone call reporting stolen sheep from an elderly farmer. When he and his partner Jack arrive at the farm, it’s clear that Guy has early signs of dementia. Following a conversation with his wife Kim, Dave becomes intrigued with Guy’s family history. Was there a sister, or was there not? No one seems to know.

So how will Dave’s investigation impact Brianna’s world? While battling the threat of bushfires back in Merriwell Bay, Brianna is faced with challenges that test her relationships with those she loves most. Suspenseful and incendiary, Suddenly One Summer is an intriguing and heartfelt story of the unlikely connections of life on the land.

Engrossing tale of married life, old secrets and life on the land.

Brianna Donahue and her father work the family farm while her husband works as a fly-in/fly-out lawyer in Perth. Her marriage is on shaky ground and she has been raising their two children almost single-handedly. It’s obvious she loves this life and where she and her boys thrive and that her husband loves the work he does too. How could she ever live anywhere else?

When their son goes missing, memories rise of the day when Brianna’s mother disappeared and was never found. Although Trent is found, relatively unharmed, the incident leaves both Brianna and her father shaken, especially as her husband doesn’t immediately rush to her side. He eventually shows and their argument is bitter leaving her despairing how they can find their way back as a couple.

As the long, hot summer days go by the threat of bushfire hangs over the land. Trent experiences nightmares, her other son becomes withdrawn, her father’s girlfriend insinuates it’s time for them to move in together and merge their respective farms – Brianna finds herself missing the mother she barely knew. What happened to her?

In another state, Detective Dave Burrows becomes involved with an elderly farmer who suspects his sheep have been stolen. Dave brings the social workers in to assess when he believes the old guy has early dementia. In conversation the old man talks about his sister and a mysterious woman in the barn.

Dave investigates further and discovers a deadly link between the old farmer and Brianna and her family.

Suddenly, One Summer is an engrossing story and I thoroughly enjoyed this book by Fleur McDonald. I’m a recent convert to Ms McDonald’s writing and again, she didn’t disappoint with involved plots and wonderful characters. I loved the detail about the hardships and sheer volume of work involved in farming / raising sheep which was expertly woven into the narrative. I also loved reading about the challenges of a marriage well over the honeymoon stage and further insights into Dave Burrows’ life as a policeman and husband. There is some time flips between the past and present – beautifully situated in the story to enhance the suspense and drive the plot forward.

This book kept me riveted until the end – I give it 5 stars.

Suddenly One Summer was given to me as a free book in exchange for an honest review.